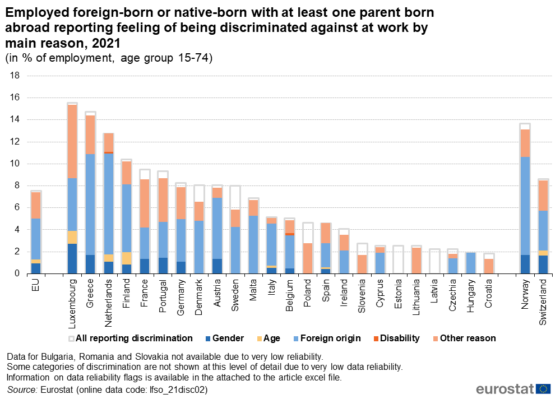 Workers in the Netherlands with foreign roots are more likely to perceive they have faced discrimination due to their foreign origins than in any other EU country, new data by the EU statistics office Eurostat shows.

The research looked at factors such as gender, age, foreign origin and disability. Responses were based on self-perception and people could give only one reason why they thought they had faced discrimination, to highlight what they believed was the main problem.

Across the EU, the highest percentage of people feeling they had faced discrimination was recorded among workers born abroad or with at least one parent born abroad. This was true especially for individuals from non-EU countries – both men (7.7%) and women (8.8%).

Workers with foreign origins were most likely to say they had faced discrimination if they were based in Luxembourg, Greece, the Netherlands, Finland and Norway.

In the Netherlands, 12.7% of people with foreign roots reported a form discrimination: 9.2% said it was down to their origins, 1.1% their gender and 0.7% their age. No other EU country had a higher percentage of workers reporting discrimination based on their ethnicity.


The Eurostat findings are broadly in line with research by Dutch discrimination registers. ‘Most complaints about in-work discrimination are related to ethnicity,’ Merie Polkamp, from the hotline Meldpunt Discriminatie Regio Amsterdam, told Dutch News.

However, she said, ‘It could also be that, compared to other countries, there is more awareness in Dutch society of what is or isn’t an acceptable behaviour, people are aware of their rights and tend to report more.’

In addition, foreign workers dealing with poor working conditions and housing may not report discrimination ‘because of their vulnerable position or because they do not know where to find the right body’, he said.

Mieke Ripken, spokeswoman for Dutch employer federation VNO-NCW, said the advice is always to report cases of discrimination so they can get be investigated and addressed.

‘It is a subject we discuss a lot with our members: we want to create more awareness and we point out the advantages of diversity on the work floor,’ Ripken said.

‘Employers who wouldn’t want employees with another cultural background in their company, will sell themselves short in the long run, because in this tight labour market, they can’t fish in the same pond forever,’ she said.

The situation in Europe

Overall in the EU, the number of women feeling discriminated against was higher than men because women are also more likely to report discrimination due to gender.

Education also seemed to play a role, as people with a lower level of education were more likely to feel they had faced discrimination as well.

The sectors with the highest proportion of people perceiving forms of discrimination were health and social work, public administration, social security, and the arts and entertainment.

This article is published in cooperation with Europe Street News, a news outlet about citizens’ rights in the EU and the UK.