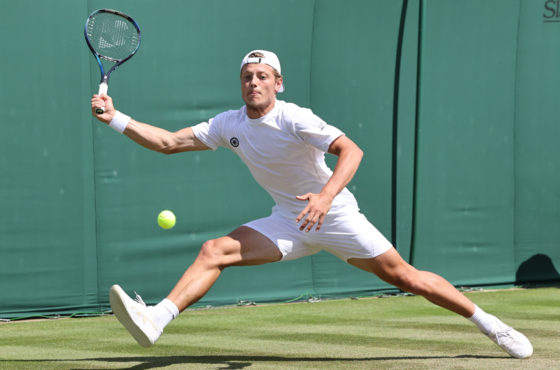 Van Rijthoven is the first Dutchman in the fourth round since 2004. Photo: EPA/Kieran Galvin

Tim van Rijthoven breezed into the fourth round of Wimbledon to set up a potential clash with six-time champion Novak Djokovic.

The 25-year-old from Roosendaal defeated the 22nd seed, Georgia’s Nikoloz Basilashvili, 6-4 6-3 6-4 to become the first Dutchman since Sjeng Schalken in 2004 to reach the last 16 of the Grand Slam tournament.

‘For me it was just about keeping the ball in play and make him play a lot of shots, give him a chance to miss, basically,’ Van Rijthoven said after the match.

The world number 104 will now play Djokovic on Sunday unless the champion’s Serbian compatriot, Miomir Kecmanović, can spring a major upset in their third-round match later on Friday.

Van Rijthoven is also the first wild-card entry to get this far in the men’s tournament since Denis Kudla in 2015. He was given a place just a week before the championships began following his surprise victory against world number one Damiil Medvedev in Rosmalen.

Djokovic has not lost a singles match at Wimbledon since he retired injured from the quarter-final in 2017. The previous year he was knocked out in the third round by American Sam Querrey.

On Saturday Botic van der Zandschulp, who is seeded 21st, will aim to join Van Rijthoven in the last 16 when he plays French veteran Richard Gasquet. The last time two Dutch players made the fourth round was 2002, when Schalken was joined by the 1996 champion Richard Krajicek.