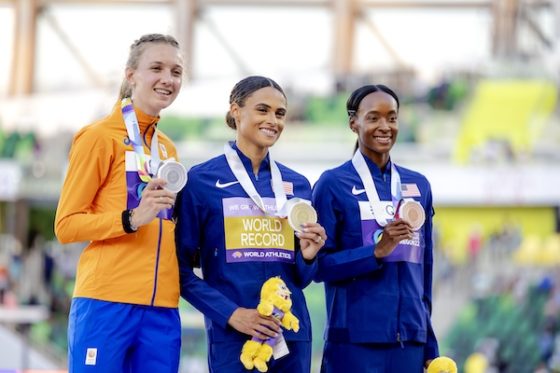 Femke Bol has won the silver medal in the 400 metres hurdles on the eighth day of the World athletics championships in the US.

The medal is Bol’s second of the games, having helped propel the mixed 4×400 relay team to the silver earlier in the week.

The race was won by Sydney McLaughlin of the US, who broke the world record for the fourth time in her career with a time of 50.68.  Bol, who is number three on the world’s fastest list, followed her over the finish line in 52.27 to equal her season’s best. The USA’s former world record-holder Dalilah Muhammad took the bronze in 53.13.

‘She was so far in front at the end, so I was always doubting if I really had a good race because it felt very good,’ Bol said of her battle with McLaughlin.

‘Then I saw the time and I was like: ‘Wow’. It is amazing to be a part of it and to come out second in such a race,’ she told the championships’ website.

The Netherlands has now won four medals in Oregon, three silver and one bronze.