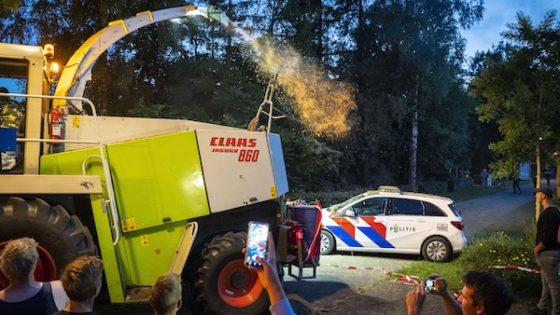 Police chiefs, politicians and farming leaders have condemned Tuesday night’s rioting outside the main home of government minister Christianne van der Wal, who has been charged with getting nitrogen pollution under control.

Farmers used their tractors to break through the police line close to her home, and at one point the situation was so dangerous, police officers say they had to flee for their own safety. Farmers also threw fireworks and dumped manure on the road.

MPs from D66, the pro animal PvdD and pro farming BBB have called for a parliamentary debate. The minister was not home at the time but her family was.

The police said on Twitter they had been unable to intervene because of the risk to officers’ own safety but that they would now track down the perpetrators. ‘The camera footage shows crimes were committed,’ Woelders said.

In Stroe, where farmers held a mass protest earlier, a police van was also attacked with hammers and vandalised.

On Tuesday prime minister Mark Rutte told protesting farmers that creating dangerous situations on the roads and the intimidation of politicians and others is totally unacceptable and ‘nothing to do with the right to demonstrate’.

Meanwhile, the farmer who chopped down over 100 willow trees in protest at the government’s ‘clearances’ said he regrets his action, after receiving hundreds of angry messages.

There is also pressure on him to resign his seat for the fundamentalist Protestant SGP on the local town council.

Tuesday was the second day of action by farmers who are angry that some may have to close their operations to meet national pollution targets.