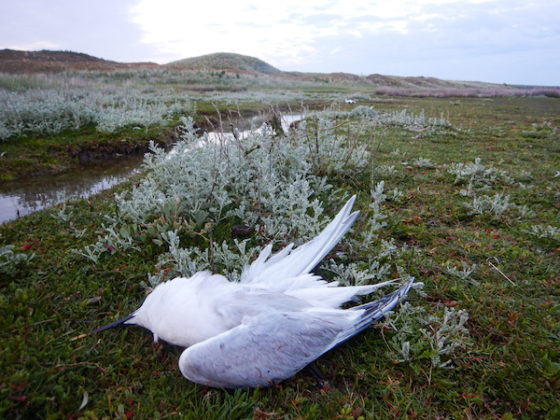 One of the dead terns on Texel. Photo: Susanne Kuehn, Wageningen Marine Research

A large breeding colony of Sandwich terns in nature reserve De Petten on the Wadden island of Texel has been wiped out by bird flu, health and safety organisation NVWA has confirmed.

Dead birds started appearing on the island in the last week of May and it is now estimated that some 7,000 birds and their chicks, have died.

According to nature conservation organisation Natuurmonumenten all 3,300 breeding pairs have fallen victim to what it calls a ‘particularly vicious outbreak’.

A small number of terns have left the island, fuelling fears of futher contagion elsewhere, while others have probably succumbed at sea as a result of the virus, experts said.

A nearby smaller colony of around 1,000 birds has also been affected and is not expected to survive. It is the first time Sandwich terns have been struck by bird flu.

Some 20,000 Sandwich terns come to the Netherlands to breed each year, with De Petten as one of their favourite breeding grounds. The birds tend to make their nests closely together, making it easier for the virus to spread.

This particular bird flu strain, the highly pathogenic H5N8, has been present in the Netherlands since 2016 and affects water birds and poultry in particular. It has since become endemic.

There is no remedy for bird flu among wild birds. To limit the spread dead birds are destroyed as quickly as possible so predators do not fall ill after eating the contaminated carcasses.

People who see dead or dying birds are advised to leave them alone. They are beyond help and touching them and moving them could spread the virus, the organisations responsible for the management of the nature reserve have said.

Dutch commercial poultry farms have been in the grip of a particularly virulent bird flu epidemic since October of last year resulting in the culling of millions of  chickens, ducks and other birds.

The latest outbreak was on June 10th in Hierden in Gelderland where two poultry farms were affected. In total some 106,000 ducks were killed as well as about 8,300 chickens.