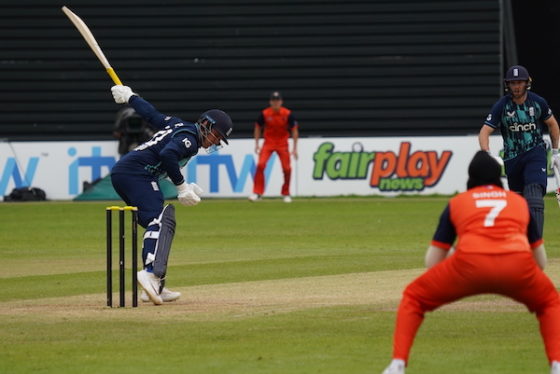 The second One Day International between the Netherlands and England on Sunday ended in a six-wicket win for the visitors and a 2-0 series lead, with one game left to play in Amstelveen.

Overnight rain delayed the start of play by nearly two and a half hours as water from the covers leaked onto the adjoining pitch area, causing it to be too soft and damp. The match was reduced to 41 overs-a-side and rescheduled to begin at 1:45 PM.

Scott Edwards, stand-in captain for the injured Pieter Seelaar, won the toss and opted to bat first on a blustery afternoon. Tim Pringle, son of former New Zealand fast bowler Chris who played 14 Tests and 64 ODIs, was handed his first International cap for the Netherlands.

The Dutch got off to an uncharacteristically slow start as Vikramjit Singh was once again dismissed early by left-arm quick David Willey, pulling a short ball to square leg for 10.

While leg-spinner Adil Rashid accounted for Max O’Dowd’s wicket off his third ball in the ninth over, caught sweeping at square leg by a leaping Dawid Malan, Brydon Carse priced out Tom Cooper in the following over, LBW plumb in front to reduce the hosts to 36-3. While he could only score a 20-ball 17, Cooper brought up his 1000th ODI run in the process and later eclipsed former Dutch captain Peter Borren’s tally of 1004 runs.

Bas de Leede hit two fours and a mammoth six, one that landed a repair bill to the KNCB after it struck the press box window, and was involved in a crucial 61-run stand with Scott Edwards. Although, it was the Edwards-Teja Nidamanuru partnership worth 73 runs, scored at over 7 runs-an-over, that helped the Dutch shift gears.

Edwards led from the front with a captain’s knock as he swept the spinners, rotated the strike well and found the boundaries at regular intervals to manoeuver the Netherlands to a respectable total on a wearing pitch. His knock of 78, following on from his unbeaten 72 in the first ODI, included four boundaries and three sixes.

Logan van Beek overcame his early struggles against the swing of Willey and the spin of Rashid to smash a six off each of them to send a search party into the adjoining bushes as his late cameo of 30 ensured the Netherlands finished with 235-7 in 41 overs.

Willey was involved in four of the seven dismissals: safely pouching de Leede and running out Edwards with a direct hit in the 35th over to go along with his two wickets – Singh and Nidamanuru.

In reply, England openers Jason Roy (73 off 60) , playing in his 100th ODI, and Phil Salt (77 off 54) sped off the blocks to give the visitors a flying start. The duo combined for a 139-run opening stand in just 17 overs as player-of-the-match Roy hit 13 boundaries and a six to go along with Salt’s nine boundaries in a show of intent.

Just when it seemed that England’s opening partnership was impenetrable, 19-year-old off-spinner Aryan Dutt broke through inducing a leading edge off Roy’s bat to his cousin, Shane Snater, at short third man at the end of the 17th over.

England slid from a comfortable position of 168-1 to 177-4 in the space of 18 deliveries still 59 runs adrift. The pitch showed signs of gradual wearing as the Dutch spinners kept the run-flow in check and chipped away with wickets. Dutt bowled Friday’s centurion Salt, deceived by the length, and in the next over, Tom Cooper had the England captain, Eoin Morgan, caught at backward point for a seven-ball duck.

Pringle picked up his maiden International scalp with a peach of a delivery: drawing Liam Livingstone, who scored a whirlwind 66 off 22 balls on Friday, forward in defence only to beat his outside edge to peg back the off-stump.

Malan survived an LBW call off Dutt’s penultimate over after opting to review. The ball tracking had the ball bouncing over the stumps to deny the Dutch their fifth wicket.

Edwards ruffled through his part-time spin options but Ali and Malan knocked off the remaining runs to help gain England an unassailable 2-0 series lead in the 37th over.

‘Plenty of positives for us today,’ Edwards said after the game. ‘We put up a better performance with the bowling being a lot better. Today was a little bit of a missed opportunity to get that score up to 260. We could have been braver but I don’t think we were far off the mark.’

‘We need to improve on our powerplay. I think that’s where they have got a hold of us so we have to figure out a few better plans for that. Looking forward to the next game.’

Shortly before the match ended, Pieter Seelaar announced his International retirement, succumbing to a persistent back injury as he drew curtains on an eventful 17-year-old career.