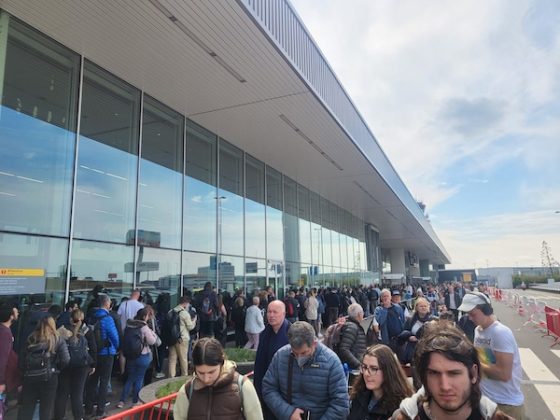 More major problems are expected at Schiphol airport in the coming weekend, with 194,000 passengers expected to pass through its doors on Sunday alone, the Parool reported on Tuesday.

With security staff levels 20% down, and a shortage of staff to guide passengers through the terminal buildings, long delays and cancellations are again likely, the paper said.

Schiphol itself has said it will take ‘far reaching measures’ to try and reduced the problems but has not confirmed what. Last weekend the airport authority urged airlines and tour operators to cancel flights or move them to other airports.

The Dutch airline association Barin and international airline organisation Iata have both slammed the airport for failing to take measures to increase staff numbers in time.

Barin is now working on a damages claim which could be in the ‘millions of euros’, the organisation said. ‘We also want Schiphol to reverse the 9% fee hike imposed from the beginning of April,’ chairman Marnix Fruitema said. ‘It is incredibly painful that we first have to pay Schiphol more and then cancel flights’.

Unions claim that the low rates of pay and irregular hours are the main reason for the staff shortages.

Schiphol’s security chief Hedzer Komduur told the Parool that work started on recruiting new security staff in January 2021. ‘But the shortage of staff is simply too big,’ Komduur said. ‘We have to keep open, but with fewer people.’

Komduur denied union claims that Schiphol pays staff badly for heavy, irregular work. ‘Security staff are paid in line with the pay deals and get bonuses for irregular work,’ he said. ‘We are looking together with employers and unions at what else can be done.’

‘People have to realise that if the entire country goes on holiday, then it will be very busy at the airport, as it is on the roads,’ she said. ‘If you can, avoid flying at the weekend and during the holidays.’

The Financieele Dagblad said in an analysis that Schiphol had contracted out many of its services and that private companies compete heavily on price.

‘Cleaners, security staff and baggage staff have the right to better pay and more job security,’ the paper said. ‘Improving working conditions can improve the situation in the longer term.’

‘That means flying will be more expensive, and the greening of aviation will also drive up prices,’ the paper said. ‘This is an unavoidable development. Schiphol and KLM will have to prepare travellers for new times and different ticket prices.’