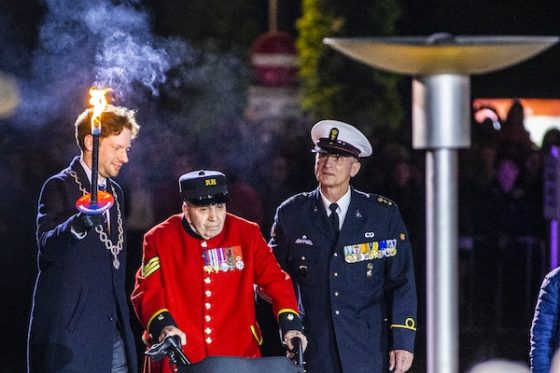 The Freedom Flame was lit in Wageningen at midnight together with 96-year-old British veteran Harry Rawlings, to kick off a day of celebration as the Netherlands marks Liberation Day.

Rawlings, who fought in World War II, is one of a group of 20 elderly British veterans to take part in the traditional opening ceremony, which includes a drive past in military vehicles.

From Wageningen, where the Nazis signed the capitulation order on May 5, 1945, the flame is taken by relay to the 14 locations nationwide where official freedom festivals are being held.

This year, for the first time, the flame was taken over the border into Germany, to light a fire in the German town of Kleve.

Liberation Day is a national holiday like New Year’s Day and King’s Day but in most pay and conditions agreements is only a paid day off work once every five years. However, civil servants are mainly free and schools are closed. Shops can open if they chose to do so.

The celebrations begin officially at midday when much decorated army officer Gijs Tuinman will give the traditional May 5 reading in Oss.

That is also the start sign for the 14 formal Liberation Day festivals: in Zwolle, Leeuwarden, Assen, Almere, Utrecht, Rotterdam, The Hague, Amsterdam, Haarlem, Wageningen, The Hague, Roermond and Vlissingen.

This year’s festival ambassadors are Suzan & Freek, Duncan Laurence, Fresku and Donnie, who will visit all 14 events by helicopter between them.

The festivals are traditionally free but this year in Groningen visitors who can afford it will be asked to pay a token €5 to help pay for the event.

A relatively new addition to the day are the ‘freedom meals’, held at a wide variety of locations nationwide and with a special ‘freedom soup’ on the menu.

The celebrations will end with the traditional May 5 concert on the Amstel river in Amsterdam, which will broadcast live on television and attended by king Willem-Alexander and queen Máxima.