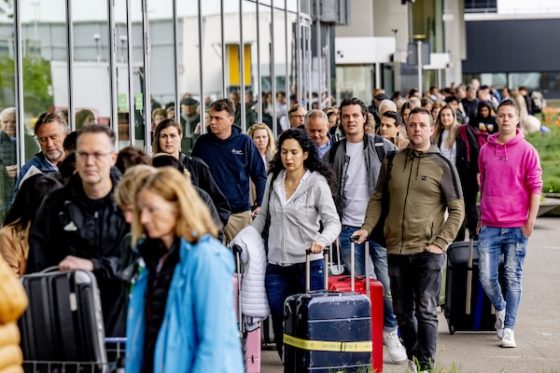 The Schiphol airport authority is asking tour operators and airlines to cancel flights this and next weekend so that passenger numbers can be better managed, broadcaster NOS said on Friday.

The airport is struggling to keep up with the surge in air travel, which is back at pre-pandemic levels over the spring holiday weekends. Staff shortages at both airlines and security are making the problem worse.

Cancelling flights is an ‘irritating but necessary measure to reduce the number of travellers so that we can deal with the pressure properly,’ a spokesman for the airport told the broadcaster.

Travellers who booked flights this weekend are being asked to contact their airline to confirm the flight is going ahead. The airport authority is also warning passengers they may experience longer waiting times and may have to queue outside the terminal.

Last weekend a wildcat strike by KLM baggage handlers compounded the problems at Schiphol and led to over 100 flights being cancelled. Roads to the airport were also closed for a time.

Not all airlines are happy about the airport’s request and tour operators have slammed the lack of provision for the holiday period.

KLM, which accounts for around half the traffic at Schiphol, said it would cancel some flights but would also be talking to the airport authority about finding a structural solution for the problem, news agency ANP reported.

KLM’s charter subsidiary Transavia said it would not be scrapping flights, after having taken action in recent weeks, while tour operator TUI said it had no plans to start ‘messing up people’s holidays’.

Corendon too said it would not cancel any flights, pointing out that cancellations also led to ‘enormous damages claims’.

Frank Oostdam, director of travel agents’ association ANVR, told the Telegraaf the call for cancellations highlights ‘the decline of a once great airport and says everything about the Schiphol and KLM business model.’

‘The problems started with them on Saturday so let them solve it,’ he said. ‘But instead, they are doing all they can to make sure transfer passengers are not affected. Dutch holidaymakers should not be missing out on the holiday they have been looking forward to because of international transfer passengers.’