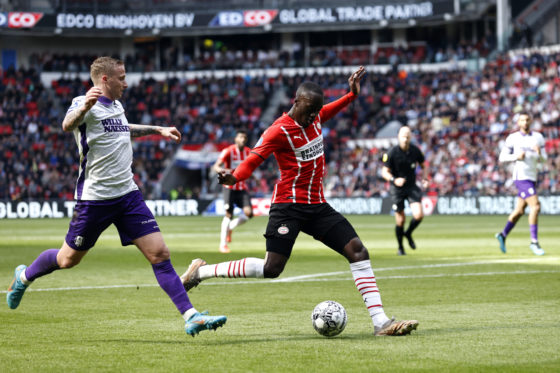 RKC survived a first-half onslaught before Joey Veerman broke the deadlock with a close-range finish after 37 minutes.

Jordan Teze made the game safe after 68 minutes with his first Eredivisie goal, shortly after Michiel Kramer had spurned a golden chance to equalise when he blasted over the crossbar.

Ajax were less convincing as they overcame Sparta 2-1, with Dusan Tadic scoring the winner from the penalty spot in the second half. The top two sides will also contest the KNVB cup final next Sunday.

Ajax’s match took second place to speculation about the future of both managers. Sparta’s Henk Fraser confirmed he was close to agreeing a deal with Utrecht, but Erik ten Hag was tight-lipped about his anticipated move to Manchester United. ‘We don’t comment on rumours,’ he said.

Feyenoord overcame an early setback to run out 4-1 winners at Heracles, who went ahead through Sinan Baksis’s smart backheel in the first minute.

Reiss Nelson set up the equaliser for Orkun Kökçü and then smashed in a second from a corner, before a limping Guus Til bundled in the third just before half-time and Patrik Wålemark tucked away a backheel of his own on 70 minutes.

Twente Enschede kept up the chase for third spot by winning 2-0 in Nijmegen in a match that turned on the dismissal of Ali Akman for stamping after 58 minutes. Virgil Misidjan opened the scoring seven minutes later with a shot from the edge of the box before setting up a second for Dimitrios Limnios.

Luis Openda’s goal gave Vitesse only their second victory since January 15 against a Cambuur side hit by an outbreak of food poisoning. The win takes them above Utrecht, who could only manage a 1-1 draw against relegation strugglers Fortuna.

PEC moved off the bottom of the table and drew level on points with Fortuna and Willem II as Daishawn Redan bagged a priceless 86th-minute winner against AZ.

Go Ahead Eagles boosted their hopes of a top-half finish and added to Willem II’s woes with an emphatic 4-0 win, while Heerenveen claimed the spoils in the northern derby against Groningen with the help of two goals from Sydney van Hooijdonk.