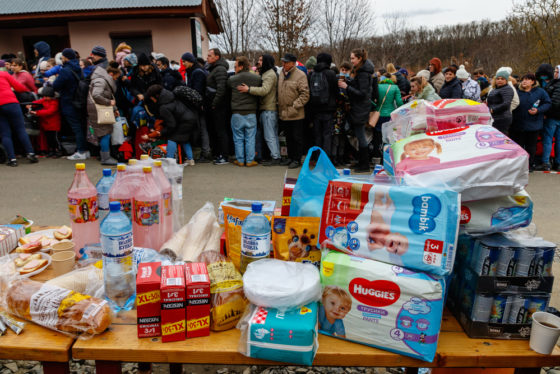 Refugees queuing at Uzhgorod, on the border with Slovakia. Photo: Depositphotos

Eleven aid agencies have opened up the collective appeal Giro555 to raise funds for what they have described as a humanitarian disaster in Ukraine.

The charities are also broadcasting TV and radio commercials to bring in donations to Giro555. An earlier appeal, Giro5125, launched by the Red Cross last week, has raised €3.7 mn since the war started a week ago.

‘For millions of Ukrainians, including 7.5 million children, there are no certainties anymore. They are dependent on humanitarian aid and need our support.’

Elsewhere in the Netherlands local organisations have been collecting essential supplies to send to Ukraine.

An appeal to buy food parcels for Ukrainian truck drivers working in the Netherlands who are unable to access their bank accounts raised €125,000 in its first two days.

In Leiden, marketing agency owner Roald Laport has been appealing for donations of blankets, toiletries and baby food, to be transported to the conflict zone via Limburg.

In Haarlem, vintage store owner Anna Roelofs-Ivanchenko is collecting clothes and other goods to be sent to the Polish and Romanian borders, where many women and children are taking shelter after the men were ordered to stay and fight.

Organiser Taco Potze, whose software firm Open Social employs 15 Ukrainian programmers, said he had had offers of support from several local businesses as well as football club FC Twente and the university.

‘The stories of these people and the images of their country on the news didn’t leave me unmoved,’ he told Tubantia. ‘I had to do something, I couldn’t ignore such a human tragedy.’