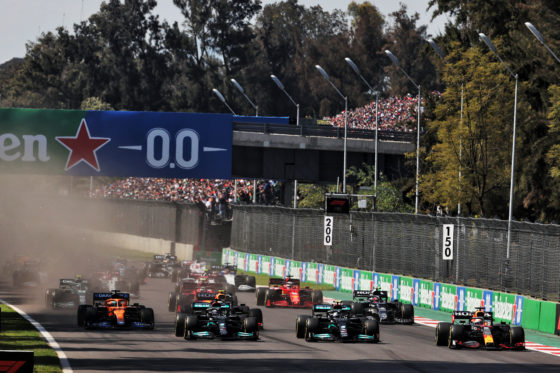 Max Verstappen has said he is not resting on his laurels after extending his lead in the drivers’ championship to 19 points with a commanding win in the Mexican Grand Prix.

Verstappen seized the initiative on the first corner of lap one, overtaking the McLarens of Lewis Hamilton and Valtteri Bottas to take a lead that was never threatened.

Bottas fell out of contention seconds later when he was clipped by Daniel Ricciardo, but bagged the point for the fastest lap after switching to soft tyres for the final lap.

A frustrated Hamilton was unable to make inroads on Verstappen and had to hold off a challenge in the final laps from Red Bull’s other driver, Sergio Perez, who became the first Mexican driver to finish on the podium in his home race.

‘It was nice, three-wide, and it was all about just trying to brake as late as you can,’ Verstappen said of his opening move. ‘I kept it on the track and went from third to first and that was basically what made my race.’

The Dutchman said he was looking forward to the next race in Brazil, where he won the last Grand Prix in 2019, but cautioned that ‘it can turn around very quickly.’

‘I don’t believe in momentum,’ he said. ‘So every single race we have to try and nail the details. Things can go wrong very quickly or they can go right. It’s going to be really tight and exciting to the end.’