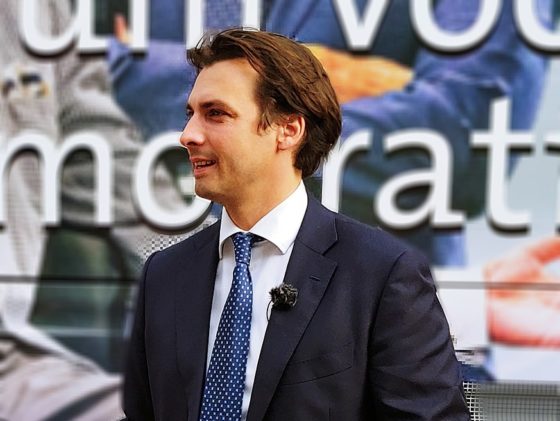 An MP for far right party Forum voor Democratie has threatened a fellow MP with a ‘tribunal’ because of his support for the government’s coronavirus strategy, further increasing concern about the party’s extremist stance.

Pepijn van Houwelingen, one of four FvD parliamentarians, told D66 MP Sjoerd Sjoerdsma that he had committed crimes. ‘Your time will come… there will be tribunals’, Van Houwelingen said, and refused to take back his words when asked to do so.

Sjoerdsma, an MP for nine years, said he had never before been directly threatened in parliament by a colleague. ‘I do not take it lightly,’ Sjoerdsma said.

Houwelingen made the remarks when asked to distance himself from FvD leader Thierry Baudet, who said at the weekend people who had not been vaccinated against coronavirus were being treated like the Jews during World War II.

The heated exchange is the second involving FvD MPs in two days. On Tuesday evening, Volt MP Nilufer Gundogan said she and her mother were being overwhelmed with hate mail from supporters of both the FvD and another fringe party Denk.

While Denk apologised to the MP, FvD parliamentarian Gideon van Meijeren said he was ‘enormously proud’ of all the effort the party’s supporters were putting into making Gundogan change her views on coronavirus.

MPs have been wrestling for some time with how to deal with the increasingly extreme viewpoints expressed by FvD MPs, both inside and outside parliament.

D66 leader Sigrid Kaag said on Twitter on Tuesday that it is no longer possible to ignore the party. ‘I want to draw a line now,’ she said. ‘Who ever stays silent, is in agreement.’

‘He gets people worked up because that is how he exacerbates divisions in society,’ Aalberts said.

Parliamentary chairwoman Vera Bergkamp has three instruments at her disposal to deal with MPs who break parliamentary protocol. She can give them a formal warming, she can remove their speaking rights and she can have them removed from the chamber.

Constitutional law professor Leonard Besselink told news website Nu.nl that Bergkamp should be tougher when anti-Semitic, homophobic and xenophobic language is used in parliament. Some of Baudet’s statements, he said, ‘undermine the democratic nature of the debate’.

Leiden University professor Wim Voermans said politicians should always counter Baudet’s untruths and insults. ‘You cannot let this polder-Trump get away with it,’ Voermans told the website.