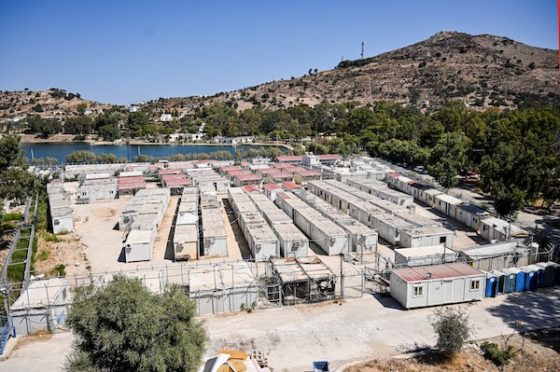 A refugee camp on the Greek island of Leros. Photo: Theophile Bloudanis / AFP

A retired Dutch banker and 23 other international aid workers charged with human trafficking, spying and membership of a criminal organisation are appearing in a Greek court on Thursday.

Pieter Wittenberg (74) and his co defendants could face prison sentences of between 10 and 25 years if convicted.

Wittenberg travelled to Greece for the trial voluntarily. ‘I felt I had to go because I want to be there when judgement is passed on me. I don’t consider myself guilty,’ he told the NRC. ‘That is why I have to be in court and show them who I am. I want to look the judges in the eye and they me. I need to convince them that there was nothing criminal in what I was doing,’ .

Wittenberg and most of the other aid workers all worked for the Greek aid organisation Emergency Response International (ERCI). Wittenberg, an experienced sailor, guided in refugees off the coast of Lesbos every night, using the organisation’s boat.

‘We would see boats but did not take refugees on board. We remained at a distance, gave them life jackets and said: follow us. We’ll take you to a spot where it is safe to land,’ Wittenberg said.

The former banker, who went to Lesbos at the height of the refugee crisis in 2015  after losing a son in a traffic accident, calls the accusation that he was part of a gang posing as an NGO to smuggle people to Greece for money ‘totally unfounded’.

Amnesty International and Human Rights Watch said the move by the Greek government signals a worrying trend to criminalise humanitarian aid organisations, not just in Greece but in the whole of Europe.

‘The abuse of the legal system by the Greek authorities to harass these aid workers seems to be meant as a deterrent for future aid missions, which will only endanger more lives,’ Bill van Esveld of Human Rights Watch told the paper. ‘The slapdash investigation and absurd charges against people who are saving lives smell of a politically motivated persecution,’ he said.

Amnesty Internationall sees the move as a way of discouraging immigration. ‘Europe and national authorities want to stop immigration. Help by NGOs could encourage people to come and that is why their work has been hampered by repressive measures,’ said Elisa De Pieri, whose report Punishing Compassion: Solidarity on trial in fortress Europe includes court cases against aid workers in Greece, Italy, Croatia, Malta, Spain, France, Switzerland and the UK.

Part of the problem is that most countries have only a vague definition of people smuggling while European migration guidelines do not clearly distinguish between aid work and people smuggling either, De Pietri said.

Humanitarian help has to be exempt from prosecution, GroenLinks MEP Tineke Strik told the paper but so far the European Commission has not acted to change the guideline.

The case against Wittenberg and his fellow defendants is the biggest of its kind in Europe but not the first agains Lesbos aid workers. In 2018 three Spanish firefighters and two Danish volunteers accused of similar offences were exonerated by a Greek court.

Wittenberg said he hoped that case would have a bearing on his. ‘But if I have to go to jail I wouldn’t mind,’ he said. ‘If that is the sacrifice I have to make so be it.(..) This is about something bigger. I hope the trial will bring an awareness that helping others is not a crime and that we are on a slippery slope.’