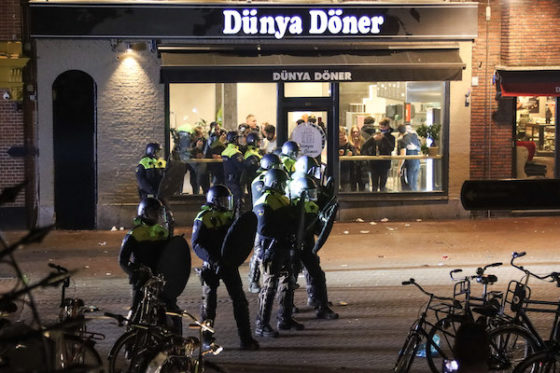 There were few problems with the introduction of the 8pm closing time for cafes and bars on Saturday night, but in Breda the rule was widely ignored and in Leeuwarden riot police were drafted in to break up crowds who gathered in the city centre.

The 8pm closing time was imposed by the government from Saturday in an effort to combat the sharp rise in coronavirus cases and hospital admissions.

In most big cities, including Amsterdam, The Hague and Rotterdam, bars and clubs generally obeyed the new closing times but in Breda, dozens refused to close until midnight in protest.

The city’s mayor Paul Depla declined to intervene but did say if they do the same on Sunday, they will face fines.

Café owners in Zwolle and Leeuwarden had also threatened to ignore the new rules, but did close on time, following the intervention of their mayors.

However, in Leeuwarden, a large crowd gathered near the Zaailand court complex after the earlier closing time singing songs and setting off fireworks, local paper Leeuwarder Courant reported.

When they refused to go home, riot police moved in to break up the crowd and made 15 arrests, the paper said.

The early closing time has been brought in for an initial period of three weeks.