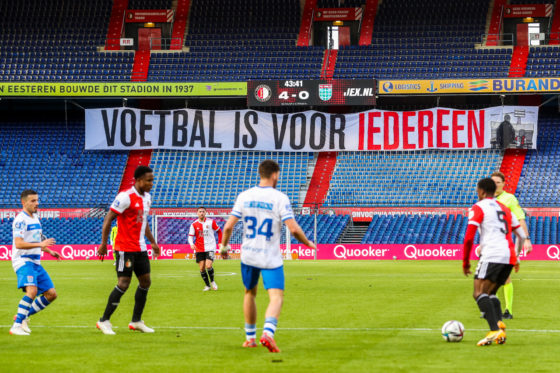 Ajax rediscovered their scoring boots with a 5-0 win in Waalwijk to preserve their narrow lead in the Eredivisie.

Sebastian Haller nodded in a cross from Dusan Tadic to end a 197-minute spell without a goal after 17 minutes.

Steven Berghuis doubled the lead with a tap-in just before half-time and bagged another soon after half-time before Juriën Timber and Haller sealed a comfortable victory.

Coach Erik ten Hag regretted the absence of fans from the stadium under the coronavirus restrictions. ‘You do it for the people, so it’s a real shame when they’re not there,’ he said. ‘Our players turned things round today and I’m very happy with that.’

PSV Eindhoven enjoyed a 24-hour spell as league leaders following a 2-0 win against in-form Vitesse Arnhem on Saturday. Ibrahim Sangaré lashed in a volley from outside the area to break the deadlock after 19 minutes, with Bruma adding the second 10 minutes later.

Third-placed Feyenoord swept aside PEC Zwolle in Dick Schreuder’s first match in charge of the bottom-placed side. Bryan Linssen and Luis Sinisterra put the Rotterdammers 2-0 ahead in the first 10 minutes, with Linssen and Guus Til wrapping up the match before half-time.

Utrecht lost ground in fourth place as they went down 2-1 in Leeuwarden, in one of several matches that had to be briefly suspended after fans set off fireworks inside the ground. Jamie Jacobs’s fourth goal of the season early in the second half proved to be the winner for Cambuur, who moved up to seventh.

A controversial penalty scored by Ricky van Wolfswinkel proved the difference between FC Twente and Sparta, who completed the transfer of goalkeeper Maduka Okoye to English Premier League side Watford for €7 million this week.

Okoye made several fine saves, but was unable to keep out Van Wolfswinkel’s spot-kick after Michel Vlap was brought down in the penalty area as he shot on goal. After a long deliberation the VAR panel decided he was still in possession when he was fouled.

NEC looked to be on course for a third win in four league matches until AZ Alkmaar’s Zakaria Aboukhlal headed in a equaliser in the third minute of injury time.

Groningen moved away from the relegation spots with a 1-0 win at Go Ahead Eagles, while Heracles ended a run of four matches without a win to beat Fortuna Sittard 3-1. Franca Overtoom made history at Go Ahead’s match as the first female assistant referee in the Eredivisie.

Heerenveen also won their first game in five despite the early dismissal of Anthony Musaba, Nick Bakker scoring the winner against Willem II with a looping header in the 76th minute.