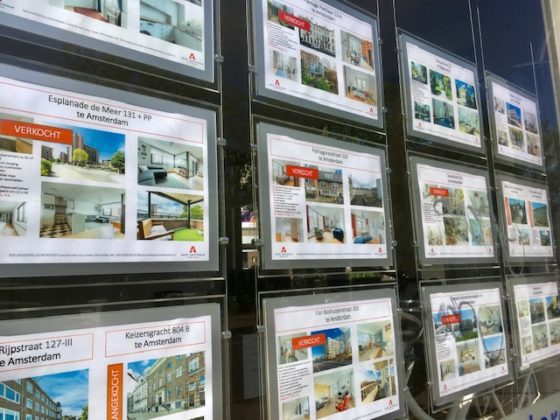 The Dutch central bank has published four recommendations which it says will help the next government achieve a more balanced housing market in the Netherlands.

House prices continue to rise and the shortage of affordable housing in particular is growing. While building more homes, with greater central government regulation is a given, there are other things which the next government should also consider, the central bank said.

The overheated Dutch housing market, the bank says, is characterised by poor accessibility, risky borrowing behaviour, supply shortages and large unwarranted discrepancies between owning a home and renting one in the non-subsidised rental sector.

Firstly, the bank recommends the next cabinet stop taking measures which make it easier for people to spend more money on a home, such as the special loans and the abolition of transfer tax for first-time buyers.

‘While they were well-meant, they are counterproductive,’ the bank says. ‘Increasing purchasing capacity mostly tends to drive up both prices and debts. This is not of much help to first-time buyers, who end up having bought the same home, but at a higher price and burdened with larger debts, with attendant higher risks.’

In line with this, the bank also suggests the government abolish a scheme allowing parents to give their children up to €100,000 tax free to buy a home. In particular, the gift widens the gap between the purchasing power of first-time buyers with and without wealthy parents, the bank says.

More controversially, the central bank also suggests a shake up of the tax breaks and taxes paid by home owners at the moment.

While tenants pay wealth tax on their savings, buyers can build up equity almost tax-free and benefit from the tax break on mortgage interest payments, the bank points out.

‘Of two neighbouring households whose income and family composition are identical, the household in a home in the non-subsidised rental sector is financially much worse off than its neighbours who own their home,’ the bank said.

One way to reduce inequality, it suggests, is to gradually phase out the tax relief that favours home ownership – a politically sensitive move – and to make home owners pay asset tax over the value of their homes.

The bank says its analysis shows that doing this can be done without hitting home owners hard, as long as the change is gradual and other taxes are reduced.

Mortgage tax relief is gradually being reduced but four parties currently in talks on forming a new government are divided on scrapping it altogether.

D66, for example, backs ending mortgage tax relief but opposes the introduction of a tax on home ownership. It argues that a tax on owning a home would hit pensioners who have paid off their mortgages and have modest incomes particularly hard, because the value of their home is on paper only.