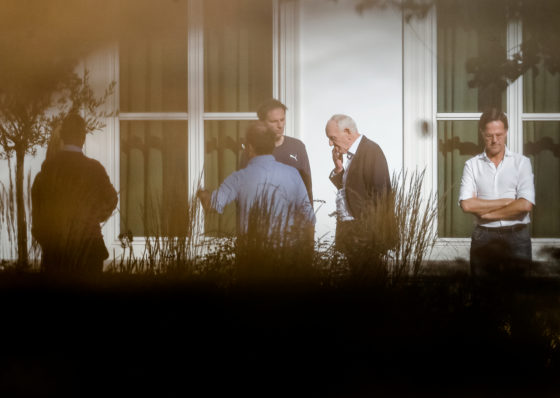 Wopke Hoekstra (back to window) and Mark Rutte (r) at an earlier stage of talks at the Catshuis. Photo: ANP/Bas Czerwinski

The start of talks to form a new Dutch government has been overshadowed by claims that Christian Democrat (CDA) leader and finance minister Wopke Hoekstra was involved in an ‘underground campaign’ to attack Mark Rutte in the run-up to the election.

Two journalists from TV current affairs show Op1 published a book detailing plans to run a series of American-style ads focusing on the ‘broken promises of Rutte’ during his decade as prime minister.

The authors, Peter Kee and Thijs Broer, quoted internal emails from the CDA’s campaign team in which they discussed setting up an anonymous Twitter account called @Ruttedoctrine to post films criticising the failures of Rutte’s previous cabinets.

Hoekstra was a minister in the previous administration and the CDA was a partner in two of Rutte’s three cabinets since 2010, including the centre-right minority coalition that fell after 18 months when Geert Wilders’s PVV party withdrew its support.

In a response, CDA interim chairman Marnix van Rij said the idea had been discussed in the party’s campaign team, but was dismissed as ‘unworthy of the CDA’ before the plan could be put to Hoekstra.

Van Rij said the allegations in the book were based on one e-mail that was discussed in an online party meeting on February 8 by a group including parliamentary group leader Pieter Heerma and Pieter Omtzigt, the number two candidate on the election list who split from the party in May.

The films, proposed by Hans van der Wind, the CDA’s head of fundraising and largest single donor, ranged in content from criticising the government’s coronavirus strategy and the childcare benefits scandal to the unproven allegations of child abuse against the former senior civil servant Joris Demmink.

‘A number of TV producers were approached on [the group’s] own initiative to make films about “the broken promises of Rutte”, but in the end they were not produced,’ Van Rij said.

The talks in Hilversum between the four parties – Rutte’s VVD, the CDA, D66 and the ChristenUnie – will last three days and are intended to identify the central themes of the next coalition agreement.

In contrast to the past, when cabinets have drawn up detailed binding agreements before ministers are sworn in, lead negotiator Johan Remkes has said the parties will agree an outline programme for government first and fill in the details after ministers have been appointed, giving parliament and external parties more say.

The negotiators will also meet people whose homes were damaged by earthquakes caused by gas extraction in Groningen, families wrongly accused of childcare benefit fraud by the tax office and independent MP Pieter Omtzigt, who quit the CDA after his critical report of its campaign was leaked to the media.