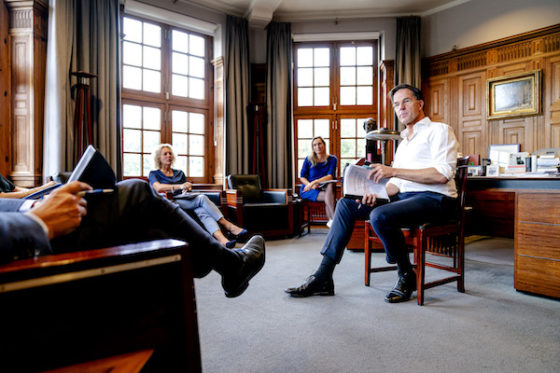 Mark Rutte with his advisors ahead of the debate. Photo: Bart Maat ANP

Prime minister Mark Rutte is centre stage on the second day of the debate on the caretaker government’s 2022 spending plans on Thursday, as he answers MPs demands.

During Wednesday’s debate, which ended just after midnight, MPs put forward a number of proposals, with most focus going on scrapping the extra property tax paid by housing corporations and doing more to tackle climate change.

There is a clear majority to get rid of the tax, which housing corporations say is preventing them from building more social housing. The move would cost the treasury €1.9bn a year, and until now, the current government has only said it is prepared to lower the tax.

Commentators had hoped that Wednesday’s debate would make clear if there is more scope for forming a new coalition government, but that did not appear to be the case, broadcaster NOS said in its report.

RTL Nieuws correspondent Frits Wester said Wednesday’s debate was largely constructive but that much will become clear on Thursday when Rutte responds to MPs, particularly the call to end the landlord tax.

The outgoing government has set aside €1bn for extra spending. However, efforts by the VVD’s parliamentary party leader Sophie Hermans to win support for specific plans among potential coalition partners appear to have failed so far.

Nevertheless, Thursday could be a day of political deals, the Volkskrant said in its analysis.

‘Rutte will definitely take the forming of a new cabinet into account when looking at the opposition’s demands,’ the paper said. ‘A gesture to the left or even the right could mean a breakthrough in the impasse.’