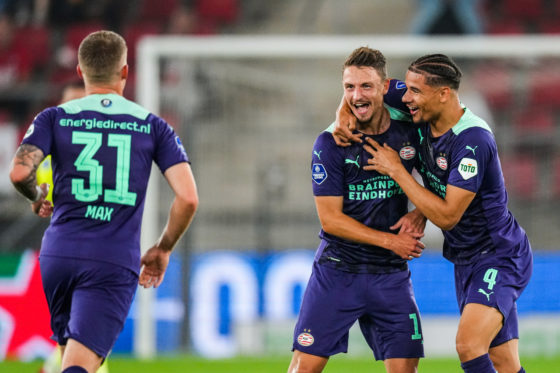 PSV Eindhoven maintained their 100% start to the Eredivisie season with a commanding 3-0 win in Alkmaar.

French defender Olivier Boscagli opened the scoring with a 35-yard howitzer that flew past a statuesque Peter Vindahl Jensen, making his debut in AZ’s goal. Substitute Yorbe Vertessen scored the second after 69 minutes before setting up Ritsu Doan for the third.

Ajax went clear in second place as they won 2-0 at bottom side PEC Zwolle, who are still waiting to score their first goal in the 2021/22 season. Sebastian Haller scored both goals in a drab game mostly memorable for the debut of Ajax’s ‘Three Little Birds’ away kit.

A memorable last-minute goal by Twente’s Robin Pröpper denied Utrecht the chance to keep up the pace at the top. The defender twisted on the edge of the area before finding the net with a dipping shot from a tight angle.

‘I don’t score many with my left foot, but it was a case of aim for the top corner and hope it got tapped in or went in,’ said Pröpper afterwards.

Newly promoted sides Cambuur Leeuwarden and Go Ahead Eagles laid on a goal fest as Cambuur came back from 1-0 down thanks to two goals by Tom Boere. The Frisian side scored four times in 11 minutes to turn the game around in the second half.

NEC Nijmegen missed a gilt-edged chance to claim their third win in a row when Willem II’s goalkeeper Jorn Brondeel was sent off after 15 minutes for handling the ball outside the area. But fourth-choice keeper Connor van den Berg managed a clean sheet as the Tilburgers ground out a point.

Vitesse Arnhem captain Danilo Doekhi returned from a month’s layoff with a hamstring injury to score his first goal for the club and set up a 2-1 win at RKC Waalwijk that moved the Arnhem side up to ninth place. Yann Gboho scored the winner in the second half after Saïd Bakari had equalised.

Sparta Rotterdam moved out of the bottom three with their first win of the campaign against Fortuna Sittard. Henk Fraser’s side went two goals up within half an hour through Bryan Smeets and Lennart Thy.

Mats Seuntjens pulled one back early in the second half, but Sparta had the last word when 18-year-old Emanuel Emegha latched onto Smeets’s long ball and steered in his first professional goal.

The ‘derby of the north’ between Groningen and Heerenveen ended all square after Cyril Ngonge headed in a corner for Heerenveen midway through the second half. The home side led 1-0 at half-time thanks to Tibor Hallovic’s 19th-minute strike.