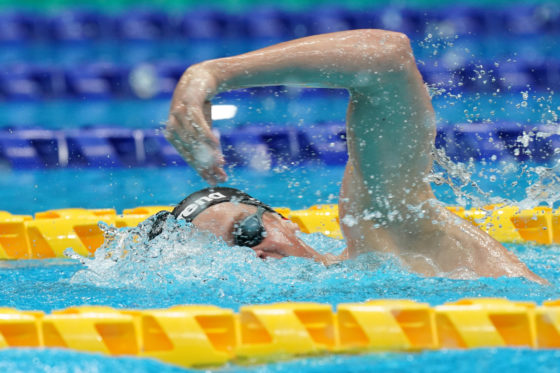 Rogier Dorsman won three of the 17 gold medals in the pool. Photo: SCS/Jurjen Engelsman via ANP

The Netherlands finished fifth in the overall medal table with 25 golds, 17 silvers and 17 bronzes. Ukraine, Brazil, Australia and Italy all won more medals in total, but the high winning percentage lifted the Dutch above them.

Vergeer, the seven-time wheelchair tennis champion, put the success down to focusing on athletes who were most likely to do well. Five years ago a larger Dutch contingent came away from Rio with 17 gold medals.

‘I can’t say I’m anything other than very proud,’ she said. ‘Not just with the medals but with the quality that was on show.

‘When we go to the Paralympic Games we want to achieve the best we can. The international standards are often not high enough and are more concerned with taking part. That’s not what we’re about.’

Swimmer Rogier Dorsman won three gold medals in the pool and was selected to carry the flag at the closing ceremony. ‘It was a very great honour for me to carry the national flag,’ he said. ‘Two of my races didn’t go so well because I made mistakes, but if you win three gold medals and set a world record it’s definitely been successful.’

Seventeen of the gold medals were won in the pool, with other successes coming in wheelchair basketball, tennis, athletics and cycling. In the latter sport Jetze Plat won a unique treble of triathlon, road race and time trial.

The next Paralympics will be held in 2024 in Paris.