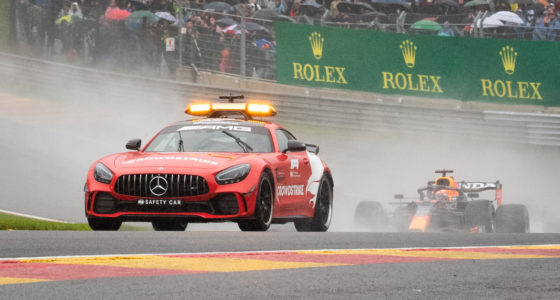 Max Verstappen will go into next weekend’s Dutch Grand Prix just three points behind Lewis Hamilton in the drivers’ championship after winning the shortest race in Formula One history.

‘It’s a win but it’s not how you want to win,’ said Verstappen after the Belgian Grand Prix was abandoned because of incessant rain at the Spa-Francorchamps circuit on Sunday.

The race got away at 6.17pm, more than three hours after the scheduled start time, and after following the safety car round for the opening three laps, the drivers were called back in as conditions deteriorated again.

Half points were awarded because more than two laps were completed, with the drivers finishing the race in the same order that they started on the grid. Verstappen earned 12 and a half points while Hamilton took seven and a half for third place, with Williams driver George Russell claiming his first podium finish between them.

It’s a shame the bad weather denied us a proper race. It’s P1, but the real winners are all the fans that stayed at the track in the rain all day 🖤💛❤️ Incredible 🙌 #BelgianGP 🇧🇪 pic.twitter.com/3bJcoBrJK7

Around 75,000 fans waited three hours in the rain to watch less than five minutes of non-competitive driving, including a sizeable contingent of Dutch fans who will hope to see more of their hero at Zandvoort next weekend.

‘Now, in hindsight, it was very important to get that pole position,’ Verstappen said.

‘At 3.30pm the conditions were decent but the visibility was very low. I think if we’d started at 3pm we would have had a decent chance. Big credit to the fans for staying here all day.’

Hamilton leads the drivers’ standings with 202.5 points, with Verstappen on 199.5 and McLaren’s Lando Norris third on 113.