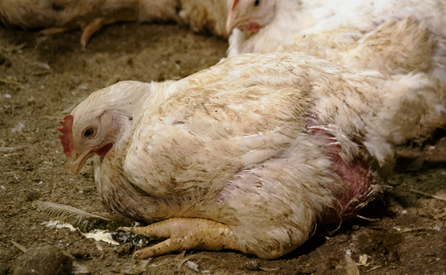 Meat from fast-growing chickens will be completely banned from supermarket shelves by the end of 2023 as the last remaining supermarket reluctantly joins the rest who have already pledged to make the switch.

From the end of 2023 all chicken meat will have at least a one star ‘better life’ certificate, something animal protection organisation Wakker Dier has campaigned for for almost a decade.

Boni was the last supermarket chain to fall in with market leader Albert Heijn whose decision to adopt the one star certificate persuaded other supermarkets to follow suit.

Extremely fast growing chickens known as ‘plofkip’ had been phased out from fresh meat counters but supermarkets were still luring customers in with special offers featuring chicken with the lowest living standards. This too will now come to an end.

Hilhorst said the chickens, which in the worst scenario were forced to put on as much as two kilos of weight in six weeks, will have a better life.

‘The label comes with certain conditions, which will be checked by the animal protection service Dierenbescherming. The rate of growth for these chickens will be lower and that will make them healthier. They will also have more space and a covered outside space. That means chicken farms will have to change and chickens raised for meat will once more become part of the landscape.’

Boni financial director Frank Klören said the decision had been a ‘difficult’ one. ‘Chickens may benefit but not the climate,’ he said. ‘Chickens with the one star certificate live two weeks longer which means two weeks’ worth of feed and extra manure. This will put more pressure on the environment.’

The union of poultry farmers NVP also commented that ‘the plofkip is better for the climate’. ‘It’s a terrible step to take from an environmental point of view,’ NVP chairman Bart-Jan Oplaat said.

‘Putting all those chickens outside will increase CO2 emissions. And I’m not so sure farmers will get permission to increase their farm size. It will be a job to get all this done in two years’ time.’

Oplaat also said he does not trust the supermarkets to keep their word, which would be a risk for farmers who make the necessary investments. ‘They may find it’s too expensive and get their chickens from Poland,’ he said.

Wakker Dier said it will now focus on fastfood chains, wholesalers and butchers which are still selling chicken without any form of animal welfare certificate.