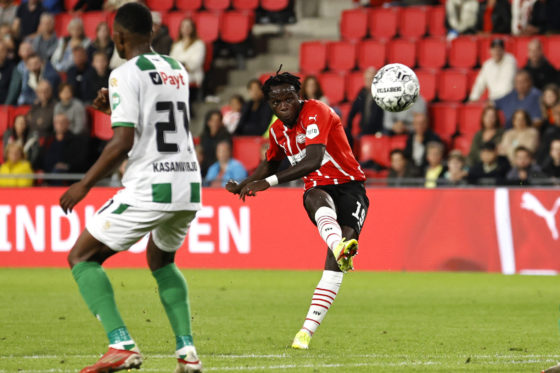 PSV Eindhoven are the only club in the Eredivisie with a 100% record after three games after recovering to beat Groningen 5-2 in the Phillips Stadium.

The visitors were 2-1 up after 18 minutes as Cyril Ngonge struck twice against his former club, but regained the lead on the stroke of half-time when André Ramhalho headed in from a corner. Eran Zahavi and substitute Bruma put the gloss on the scoreline in the second half.

Feyenoord, who started the weekend on top of the table, suffered a 3-1 reverse at Utrecht despite taking a 1-0 lead just before half-time as Luis Sinisterra capitalised on Alireza Jahanbakhsh’s oustanding pass.

Utrecht still had time to equalise before the break with Willem Janssen’s tap-in before scoring twice in the first five minutes of the second half, including a Simon Gustafson penalty.

Ajax recovered from dropping points in Enschede a week ago to record their second successive 5-0 win at home against Vitesse Arnhem, with South American duo Antony and Edson Álvarez standing out for the champions.

Newly promoted Go Ahead Eagles and Cambuur Leeuwarden both recorded their first wins of the season. An early penalty by Justin Bakker put Go Ahead on their way against Sparta before Giannis Botos sealed the points with a header in the second half.

Cambuur prevailed by the same scoreline against FC Twente, with both goals coming from substitute Jamie Jacobs.

AZ Alkmaar overcame Heerenveen 3-1 for their first win of the season in Teun Koopmeiners’ last match before his transfer to Atalanta Bergamo. AZ are hoping to sign Heerenveen’s Joey Veerman for around €4.5 million before the transfer window closes, but it was his namesake Henk who put the Frisians ahead before Vangelis Pavlidis, Aslak Fonn Witry and Dani de Wit turned the match around.

Newcomers NEC Nijmegen won for the second week in a row thanks to Ali Akman’s second goal of the season against Heracles, while two goals by Michiel Kramer earned RKC a point at Fortuna SIttard.

PEC Zwolle are still seeking their first point and their first goal after going down 1-0 at Willem II, Görkem Saglam making the difference with a measured shot in the 53rd minute.