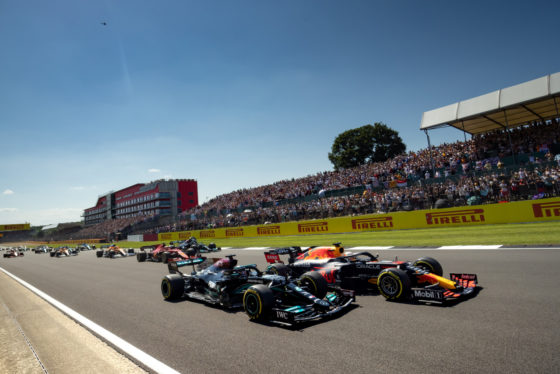 Verstappen’s race ended on the first lap when Hamilton’s Mercedes made contact with his rear wheel as the British driver tried to force his way through at Copse corner.

Verstappen walked away from the incident but watched the later stages of the race from hospital in Coventry as he was checked over following the collision.

The Dutchman was in no mood for reconciliation after he watched Hamilton snatch victory from Charles Leclerc’s Ferrari with two laps to go, overcoming a 10-second penalty imposed for causing the first-lap crash.

‘Watching the celebrations while still in hospital is disrespectful and unsportsmanlike behaviour but we move on,’ said Verstappen, who also complained that Hamilton’s penalty was insufficient.

Glad I’m ok. Very disappointed with being taken out like this. The penalty given does not help us and doesn’t do justice to the dangerous move Lewis made on track. Watching the celebrations while still in hospital is disrespectful and unsportsmanlike behavior but we move on pic.twitter.com/iCrgyYWYkm

Christian Horner, Red Bull’s team manager, was scathing in his assessment of Hamilton, accusing him of a ‘desperate’ move and ‘dirty driving’.

‘Lewis has stuck a wheel up the inside of one of the fastest corners on this world championship. He’s driven this circuit for years; you know you don’t do that here,’ he told Formula1.com.

‘The result – thank God we haven’t had a driver that’s been seriously injured or worse today.’

Red Bull also said it was ‘disgusted and saddened to witness the racist abuse Lewis endured yesterday on social media following the collision with Max’.

‘There is never any excuse for it, there is certainly no place for it in our sport and those responsible should be held accountable,’ the team said in a statement.

Hamilton described his rival as an ‘incredible competitor’ as he praised his Mercedes team’s ‘grit and determination’ later on Twitter.

Today is a reminder of the dangers in this sport. I send my best wishes to Max who is an incredible competitor. I’m glad to hear he is ok. I will always race hard but always fairly. My team showed grit and perseverance out there. It’s a dream to win in front of my home crowd💜🇬🇧 pic.twitter.com/3S16uFYmDZ

Verstappen holds an eight-point lead over Hamilton going into the 11th round of the 23-race season in Hungary in two weeks’ time.