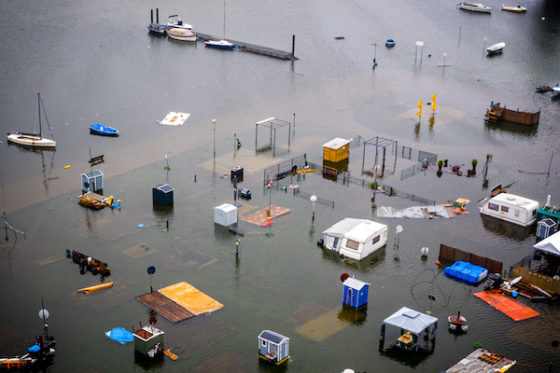 The water level in the Maas river through Limburg reached its maximum expected height in Maastricht on Thursday night, but widespread flooding in the city did not materialise.

The water level remained ‘below the doom scenario’ a local safety board spokesman said.

Nevertheless, the government has declared the regional floods as an official disaster, which means the state will pick up the bill for much of the damage. ‘It is very clear that the situation is disastrous,’ prime minister Mark Rutte told reporters on Thursday evening. ‘People are worried about their homes and their jobs.’

Several districts in Maastricht which are close to the river had been evacuated on Thursday evening as a precaution and the first residents began returning on Friday morning. The Maasboulevard tunnel and the Wilhelmina bridge remain closed to traffic.

The high water is now moving downstream towards Roermond, where 550 households were evacuated in the early hours of Friday morning. People living in a number of other villages along the river have also been urged to leave their homes.

The flooding has been caused by very heavy rain in nearby hilly parts of Germany and the Ardennes region in Belgium as well as in Limburg itself. In Germany the death toll has now risen to at least 80 with dozens more missing.

After major floods in 1993 and 1995, the Dutch government invested €2.4bn on providing better flood plains, but that work has not been enough to deal with such a volume of water. Over 10 centimetres fell in 24 hours, and over 20 centimetres over the three day period – a once in a thousand year occurrence, experts say.

‘Rain can cause problems in the Netherlands but this is a wake up call which shows rain can form a threat to public safety,’ Alex Hekman, from civil engineers Sweco told the Financieele Dagblad.

King Willem-Alexander and queen Maxima visited the Limburg town of Valkenburg, which has had the worst of the flooding on Thursday evening. 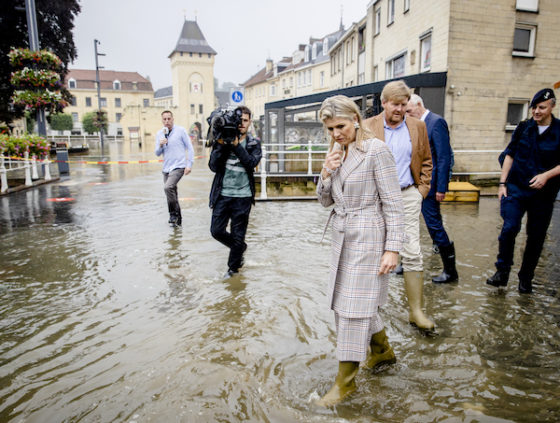 There, the army has been brought in to build an emergency bridge over the river Geul after the original bridge was washed away. The Geul itself has been turned into a wild river dozens of metres wide, which has brought muddy water to low-lying parts of the town.

‘We will only see what the damage is when the water has gone down,’ local Anita Auijlen told Dutch media. ‘We had just started painting downstairs and we’ll have to start again.’

In nearby Meerssen, Michel Lillu said the cellar of his home was completely filled with water. Lillu has lived in the town for 27 years and dealt with floods before. ‘It’s not nice, but these things happen,’ he said. ‘And then what do you do, but clear it up?’