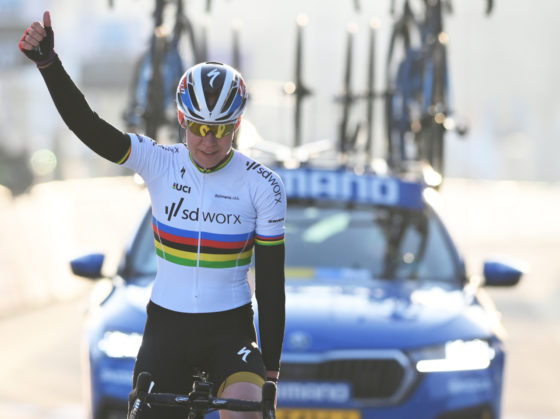 Anna van der Breggen won the Giro Donne, the women’s tour of Italy, for the fourth time at the weekend to move within one victory of the all-time record.

The 31-year-old finished 1 minute 43 seconds ahead of South African Ashleigh Moolman-Pasio, with another Dutchwoman, Demi Vollering, in third place. All three podium finishers are members of the SD Worx team.

Van der Breggen was in a group of four riders that broke away on the 10th and final stage to Cormons, but was outsprinted by American Coryn Rivera for the stage victory.

She took the leader’s pink jersey with a solo victory on stage two, a 100km race that ended at the summit of Prato Nevoso, and never looked in danger of relinquishing it.

Only the Italian Fabiana Luperini has won the Giro more times than Van der Breggen, with five victories to her name between 1995 and 2008. However, the Dutch woman indicated before the victory ceremony that she intends to retire at the end of the season and take up a management role with SD Worx.

‘It is tough, ten days of racing, and it is stressful to be in the pink jersey for nine days, so this last day was a bit like coming to an end,’ she said. ‘I felt really tired, but also happy. This is the best way to finish it.’

Dutch riders claimed five stage wins altogether in this year’s race. Marianne Vos won her 29th and 30th Giro sprints before dropping out on Saturday to prepare for the Olympics later this month, while Lorena Wiebes took stages five and eight.