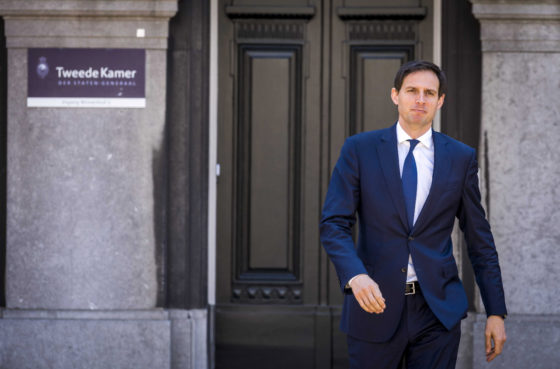 Pieter Omtzigt’s departure from the Christian Democrats at the weekend will not make the coalition talks more difficult, party leader Wopke Hoekstra insisted on Monday.

Omtzigt broke with the CDA after 18 years as an MP after a 76-page memo, in which he criticised the party’s structural problems and the way he had been treated by the leadership, was leaked to the media.

The 47-year-old has been signed off work with stress since May 25, but will now return to parliament as an independent MP, leaving the CDA with just 14 MPs. The CDA had already appointed Henri Bontenbal to take over his seat during his 16-week absence.

Omtzigt said the document was intended for internal use only and he did not know how it fell into the hands of the Limburger website, but now his criticisms were public knowledge he had decided to cancel his party membership ‘with pain in my heart’.

Hoekstra arrived at the parliamentary complex on Monday for a meeting with Mariëtte Hamer, who is co-ordinating the coalition formation, and ChristenUnie leader Gert-Jan Segers.

The CU is one of the possible fourth partners being considered by CDA, the right-wing Liberal VVD and progressive Liberal D66, to give the coalition a majority.

‘The playing field, when it comes to who can go with whom, was already looking difficult,’ Hoekstra told reporters. ‘So in that sense it’s the same as last week.’

Hoekstra said he was not concerned about the prospect of further splits within the CDA following the departure of Omtzigt, who was the second most popular candidate in the general election on March 17.

Omtzigt said he had felt undervalued by the party for his work exposing the childcare benefit scandal, which led to the downfall of Mark Rutte’s last cabinet in January, and had been passed over for the leadership in favour of Hoekstra.

He narrowly lost a leadership contest in the summer to Hugo de Jonge, but when De Jonge stepped down to concentrate on his role as health minister Hoekstra – who had dropped out of the leadership race – was appointed as his replacement.

A poll at the weekend by Maurice de Hond suggested Omtzigt would win around 20% of the vote, equivalent to around 28 seats, if an election were held next week, while the CDA would be reduced to eight MPs.

When Omtzigt returns the 150 seats in the Dutch parliament will be shared between 19 groups, including four one-member parties.