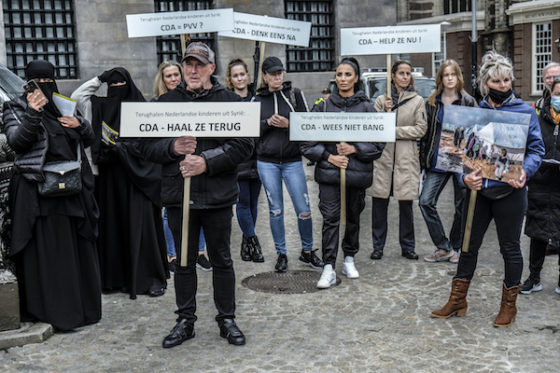 Demonstrators in Amsterdam in May calling for IS children to be brought back. Photo: Ingrid de Groot ANP/HH

Dutch officials have picked up a Delft woman and three children from a Kurdish camp in Syria where they have been living since the collapse of the IS-led caliphate.

Ilham B and her two children, plus another child, are the first group of Dutch nationals known to have been taken from the camps by the Dutch authorities.

‘We are here with a clear mandate, to bring back a small group of Dutch nationals,’ Emiel de Bont, the Netherlands’ representative in Syria told a press conference. The four are being taken to the Iraqi city of Erbil where there are Dutch consular offices.

The foreign ministry said in a statement on Saturday night that the mission to bring B back had been carried out to ensure she would stand trial, amid ‘very complex’ circumstances.

Last year, judges said the Netherlands must make an effort to bring back B otherwise she would avoid prosecution. She has been on a wanted list since 2016 and could not be tried in absentia because she made it known she wanted to be in court in person.

Her lawyer Tamara Buruma said she is pleased that the Dutch state is finally meeting its responsibilities but that the move should have been made much sooner. According to the Telegraaf, the operation has been months in the making.

The Netherlands has been struggling with deciding what to do about its jihadi brides and children and the government has said it will not actively try to bring Dutch nationals back because it is too dangerous for civil servants to make the trip.

The issue has divided the cabinet and both the VVD and CDA are opposed to bringing back the children, most of whom are under the age of 6.

Although a lower court said the Netherlands should try to bring them back, that was overturned on appeal and again by the Supreme Court.

The Dutch children’s ombudsman and Humans Rights Watch have also urged the Netherlands to bring back its nationals from Syria.

In 2019, two orphans – aged two and four – were brought out of Syria alongside 12 French children by the French government. The children were said to have been living in ‘desperate conditions’ without any form of parental guardianship.

Ministers said at the time they had no plans to bring back any more children and described the decision to bring back the two orphans as ‘a very special case’.

News agency ANP said the third child who is now being repatriated is a 12-year-old girl whose is being brought back for humanitarian reasons. Her mother remains in the camp. According to the Telegraaf, the girl’s father claims she was kidnapped.