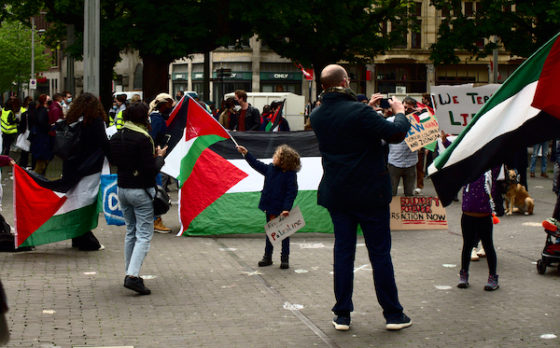 Demonstrations took place in support of Palestinians in The Hague, Amsterdam, Eindhoven, and several other cities this weekend, following Friday’s protest in Utrecht at which 100 people were arrested for failing to heed social distancing regulations.

The demonstrations have been prompted by the escalation of violence within Gaza and Israel in which at least 198 people have died.

Saturday’s demonstration in The Hague coincided with the 73rd anniversary of the day Palestinians refer to as ‘Al Nakba’, in memory of the more than 700,000 Palestinians who either fled or were forcibly expelled for the creation of the Israeli state.

That event was organised by Students for Palestine, where demonstrators waved flags and speakers shared their own stories as Palestinians. The organisers handed out free face masks and requested repeatedly that demonstrators maintain a distance of 1.5 meters during the demonstration.

‘As we did in [response to] apartheid South Africa, we came together. We said enough is enough,’ Omar Al Sadeh, Leiden student and one of the organisers said. ‘We as Europeans have one clear goal: that is to ensure normal, human rights, for everyone.

On Sunday in Amsterdam, several hundred people marched from Dam square in the city centre to Amstel station, carrying Palestinian flags and chanting. A small parallel demonstration in support of Israel took place near the stock exchange, also under heavy police presence.

There were also demonstrations in Eindhoven, Nijmegen, Groningen and Enschede, attended by several hundred people.

Meanwhile, some MPs have criticised prime minister Mark Rutte for what they called a one-sided condemnation of the violence.

‘Hamas firing rockets indiscriminately at civilians is unacceptable,’ Rutte said on Twitter late on Friday, in words nearly identical to those used by EU chief Ursula von der Leyen and US president Joe Biden.  ‘The Netherlands supports the right of Israel to defend itself, within the bounds of international law.’

That comment was criticised by MPs and campaigners, including GroenLinks MP Tom van der Lee who said on Twitter that Rutte was ‘not serving the cause of peace and justice by taking sides with Israel.’

Trade minister Sigrid Kaag also called on Twitter for an end to the violence. ‘Protect citizens. Israelis and Palestinians,’ she said. ‘Our constitution requires us to identify and counter all violations of international law. There is no room for selectivity.’

On Sunday Rutte issued a more nuanced statement after speaking to both Israeli prime minister Benjamin Netanyahu and Palestinian president Mahmoud Abbas. ‘I expressed my sympathy to both leaders for the victims on both sides’ he said.

‘I condemned the rocket attacks on Israel. Israel has the right to defend itself against these attacks, but precisely because it is a strong country, it also has a responsibility to act proportionately within the bounds of international law.

Foreign minister Stef Blok will now ‘contact his Egyptian counterpart Sameh Shoukry and possibly other foreign ministers in the region. The Netherlands will also be in further contact with the United States’ Rutte said.

‘The Netherlands stands ready to help, using our good ties with Israel, the Palestinian Authority, and Egypt and other neighbouring countries,’ Rutte said.

The escalation of violence comes as the Israeli police stormed the Al Aqsa mosque on the May 11. Meanwhile, forced evictions of Palestinians in the East Jerusalem Neighborhood of Sheikh Jarrah intensified throughout the week.


The UN estimates that the present escalation in violence has resulted in 10,000 Palestinians in Gaza fleeing their homes. More demonstrations are set to take place in the coming days.