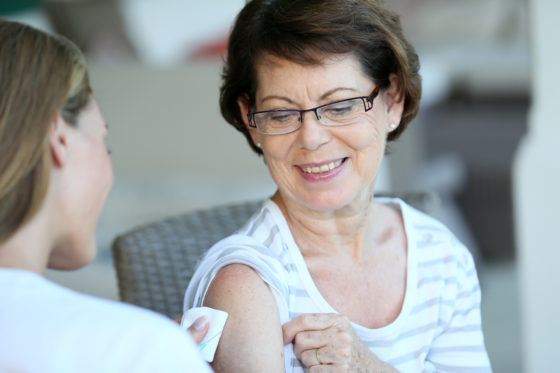 Women under the age of 65 are around twice as likely to develop side effects with the AstraZeneca vaccine than those who receive the Pfizer jab, according to initial research.

Lareb, the agency specialising in medical side effects, found that 61-67% of women experienced symptoms such as headaches, muscle pain and tiredness after their first dose of AstraZeneca. Among those who received the Pfizer/BioTech vaccine the range was 22-36%.

The biggest contrast was in people reporting a fever of more than 38ºC after being vaccinated. Among those who received the AstraZeneca vaccine 39% developed a high temperature, compared to 5% of Pfizer recipients.

Agnes Kant, director of Lareb, said the vast majority of people experienced mild side effects for around 24 hours. ‘Fevers from vaccines are not dangerous by themselves. If the fever develops six to eight hours after the jab and lasts no longer than a day or two it won’t do any harm.

‘If the fever appears later or lasts longer, it may be caused by something other than the vaccine, in which cases people should contact their doctor’s surgery if they’re worried.’

Vaccinations with AstraZeneca are resuming this week after the European Medicines Agency concluded that it was safe to use. Several European countries, including the Netherlands, suspended the jab following reports that a small number of people had developed thrombosis after receiving it, but the EMA found no evidence of a causal link.

Lareb is conducting running surveys on around 5,000 people who have received each vaccine, but so far only a tiny proportion of people under 65, such as front line healthcare workers, have received their first injection.

The first survey results to be published covered women aged 21 to 65 who have received one vaccination dose, but research is also ongoing into other age groups, different vaccines, second doses and men, Lareb said.

AstraZeneca has been the most commonly used vaccine during the first phase of the programme. In total 3,331 women who completed Lareb’s survey had been given the AstraZeneca vaccine while 599 were inoculated with Pfizer.