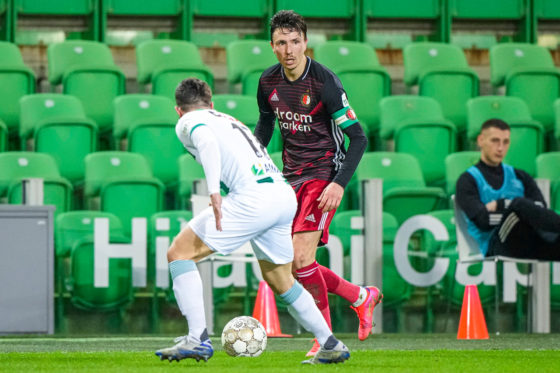 Feyenoord delivered a potentially fatal blow to PSV’s fading title hopes by holding the second-placed side to a 1-1 draw in Eindhoven.

Steven Berghuis opened the scoring for the visitors against the run of play after 15 minutes, but Donyell Malen’s delicate chip from Mario Götze’s pass brought the home side level before half-time.

PSV had the best chances to score in the second half, none more so than when Noni Maduke’s shot was turned onto the post, but they were unable to force the breakthrough.

The result leaves the Eindhoven side eight points behind Ajax, who earlier coasted past PEC Zwolle with first-half goals by David Neres and Nicolás Tagliafico. Ajax have a game in hand on their rivals, who have eight matches left.

‘What we’re missing is the final punch,’ said PSV coach Roger Schmidt. ‘We had strong periods again today that we should have taken more from. A goal is all we missed.’

AZ closed the gap on PSV with a 4-1 win over Twente in a match that featured three own goals, two for AZ and one for the visitors. Myron Boadu opened the scoring for AZ after just four minutes, while captain Teun Koopmeiners rounded off the scoring 12 minutes from time.

Vitesse Arnhem won their third match in a row to stay in the hunt in fourth, a point behind AZ. Oussame Darfalou scored twice in a 3-1 win away to Utrecht 3-1.

At the bottom of the table Willem II opened up a six-point gap over the relegation spots by beating Heerenveen 3-1 in Tilburg. The decisive moment came in the 58th minute when the visitors were millimetres away from making the score 2-1 with a shot off the underside of the crossbar. Willem II immediately took the ball up the other end of the field and scored through Ché Nunnely.

Emmen drew 1-1 in Groningen to take their unbeaten run to four matches and move to within a point of second-bottom ADO Den Haag, who went down 2-1 at home to Heracles.

The return of the Eredivisie’s top scorer, Georgios Giakoumakis, couldn’t halt VVV’s slide down the table as they lost their seventh league match in a row at home to local rivals Fortuna Sittard. Giakoumakis scored his 24th of the season after 54 minutes to level the scores at 1-1, but goals from Mats Seuntjes and Zian Flemming settled the game in Fortuna’s favour.