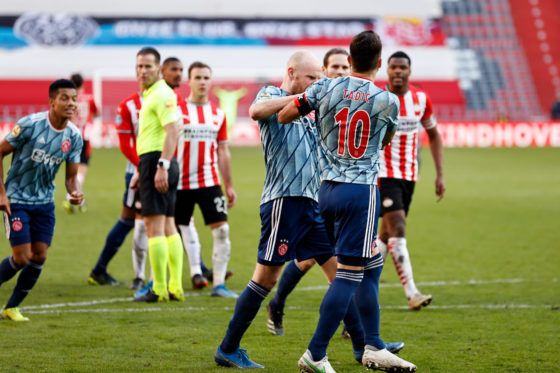 PSV missed the chance to close the gap on Ajax to three points after Dusan Tadic netted an injury-time penalty in Eindhoven.

Eran Zahavi put the home side ahead just before half-time with a flawless free-kick from just outside the area. PSV looked to have wrapped up the game in the 77th minute when substitute Yorbe Vertessen broke away, but the VAR panel spotted the ball brushing his hand just before he headed in.

There were angry exchanges after the game as Tadic accused PSV defender Denzel Dumfries of trying to stamp on the penalty spot before the kick, while Dumfries claimed Tadic had insulted his mother.

‘When you score a goal, you say bad words back, because it’s in your nature,’ said Tadic afterwards. ‘I probably said something in Serbian.’

Third-placed AZ Alkmaar are now just two points behind PSV as Myron Boadu scored a hat-trick in a 4-2 victory over Feyenoord. Feyenoord were 2-1 up after 25 minutes, but two goals from Boadu and a Teun Koopmeiners penalty ensured the points stayed in Alkmaar.

Vitesse Arnhem ended their dismal run of one point from five games with a 4-1 win over their cup semi-final opponents, VVV, for whom Georgios Giakoumakis scored his 23rd goal of the season. The win takes Vitesse back above Feyenoord into fourth place.

At the bottom of the table Emmen’s second win in a row took them to within three points of nearest rivals ADO Den Haag, while the other team in the bottom three, Willem II, managed a vital away win against Sparta.

Sergio Pena scored Emmen’s only goal in Utrecht after 14 minutes before a string of impressive saves by Michael Verrips secured the Drenthe side’s first away win since May 12, 2019.

Willem II profited from two blunders by Sparta substitute Jeffry Fortes, the second of which earned him a red card for holding back Vangelis Pavlidis in the penalty area. ADO could only manage a point in a goalless draw against RKC Waalwijk.

Heracles and FC Twente shared the spoils in the first Twente derby of the season in Almelo. The visitors twice came from behind through Quinsy Menig in the first half and Danilo early in the second.

Groningen strengthened their chances of making the UEFA League play-offs with a 1-0 win, with 18-year-old Swedish striker Paulos Abraham scoring his first goal for his new club.

PEC Zwolle beat Heerenveen 4-1 in their first game since parting company with coach John Stegeman. All four of PEC’s goals came in the second half after Mitchell van Bergen had given the visitors a 27th-minute lead.