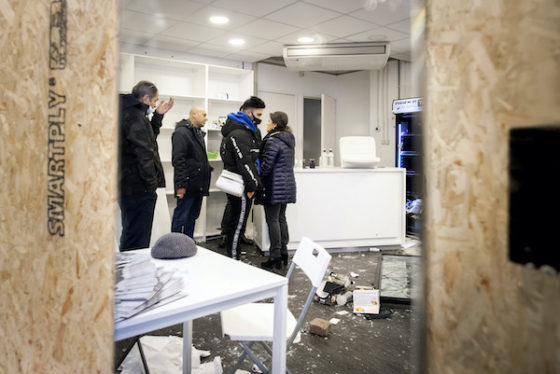 MPs, ministers and local mayors have condemned Monday night’s riots at towns and cities across the Netherlands, describing them as ‘shameless’ and the work of vandals.

Some184 people were arrested in a third night of trouble across the country, which commentators say had little to do with protests against the coronavirus curfew. The destruction led justice minister Ferd Grapperhaus to say that people arrested during the riots will face tougher legal action, not simply a €95 fine for ignoring the coronavirus rules.

‘Shameless thieves, what more can I say,’ said Rotterdam mayor Achmed Aboutaleb, after gangs of youths looted shops and attacked the police. ‘I had to threaten to use tear gas, which is a far reaching measure… and something I have never had to do in my career as mayor,’ Aboutaleb said.

Haarlem mayor Jos Wienen said that everyone would like to be freed from the coronavirus rules. ‘But that does not give anyone the right to move through the city in a gang, setting fire to things, lighting fireworks and vandalising property,’ he said.

MPs too expressed their anger. ‘Looting shops was something that happened in other countries, not here, not in our country,’ said Christian Democrat MP Wytske Postma.

‘No matter how much I am opposed to the curfew, this is not a licence to riot, damage other people’s property and loot shops,’ said Denk MP Tunahan Kuzu.

The Dutch police union Politiebond said its members had not been confronted with such violence in 40 years – when there were running battles on the streets between police and squatters.

It is crucial to monitor social media for calls to action and to keep in close touch with youth workers who know what is going on in their neighbourhoods, spokesman Jan Struijs said. Many of Monday’s gatherings had been prearranged online.

Groningen University lecturer Berend Roorda said that while the organisers of the weekend demonstrations cannot be held responsible for the violence, ‘it would be good to be aware of what they hope their demonstration will convey’.

‘Last year, other relatively peaceful demonstrations against the coronavirus measures were also taken over by troublemakers,’ he said.

Criminologist Henk Ferwerda said the weekend riots may have started out as peaceful protests but that copycat behaviour came into play on Monday. In many cases, the troublemakers were ‘people who were out for violence,’ he said. Others were swept up in the atmosphere, he said.

‘There is nothing I can say,’ the owner of a jewelry store in Rotterdam told broadcaster NOS. ‘They have wrecked all of it, and taken everything with them.’