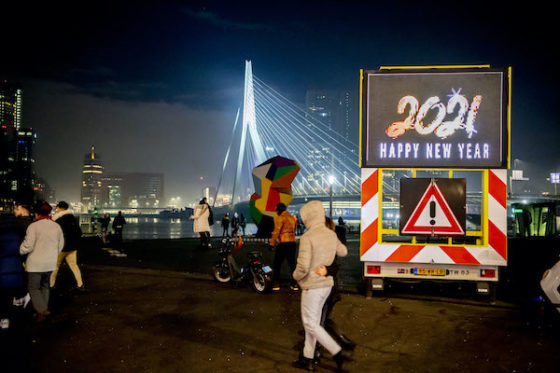 Although the firework ban was widely ignored, and dozens of cars were set on fire, police and the emergency services were called out some 30% fewer times than during ‘normal’ New Year celebrations, officials say.

Police will give a statement about the night’s events on Friday afternoon, once they have a better picture of the number of arrests and main incidents.

However, eye expert Tjeerd de Faber from Rotterdam’s specialist eye clinic told the Telegraaf this had been ‘the quietest New Year of my career’. So far just four people have been treated for firework-related injuries at the hospital. ‘That is a real contrast to last year’s horror night when we had 18 eye injuries within two and a half hours.’

Utrecht’s main teaching hospital also reported a quieter night than usual and Sandra Couwenberg from the Albert Schweitzer Ziekenhuis in Dordrecht said the evening had been ‘unusually quiet‘.

Fire officers in Delft also said the celebrations had been ‘way quieter’ than usual.

Prime minister Mark Rutte had made an urgent appeal to people not to set off fireworks during the festivities in order to relieve the pressure on hospitals struggling to cope with coronavirus.

There were, however, some clashes between groups of revellers and police, often in rural areas. Nevertheless, Jan Struijs of the police union Nederlandse Politiebond told RTL that this year’s New Year festivities were not a ‘battleground’ as they are most years.

In particular, because so many police officers were on duty, incidents could be snuffed out more quickly, he said.

In Rijswijk a group of youths tried to burn down a caravan, causing a gas bottle to explode and injuring several of them when their clothes caught fire.

Riot police were drafted in to support the fire brigade in putting out the blaze. Elsewhere in Rijswijk, a delivery van and a scooter were also set on fire.

In Arnhem, three police officers were injured when they tried to break up an illegal party, attended by some 70 people. Three partygoers were arrested.

Many of the incidents took place in smaller towns and villages, rather than the big cities.

In the village of De Kwakel, south of Amsterdam, a man was seriously injured and may have lost a hand while setting off fireworks, police said.

Police fined 14 youngsters in the village of Didam in the eastern part of Groningen because they were holding an illegal party.

The emergency services were also called out to deal with a stabbing incident in the Groningen village of Uithuizermeeden, after trouble broke out when a fire in a trailer full of wooden crates was being extinguished.

In the village of Wapenveld, in Gelderland, one police officer fired a warning shot after he was attacked by a group of youths he had questioned about a fire, the Telegraaf said.

There were more incidents in southern parts of Gelderland, and the emergency services were called out to deal with several fires. In Tiel, there was a fire at a school, but police say they do not yet know if this was deliberate or the result of a firework.

Riot police were also called out to deal with a group of around 100 people who were stopping the fire brigade putting out a burning car in Waardenburg.

The Midden-Nederland police force, which covers Utrecht and Amersfoort, made 27 arrests overnight. In Amersfoort they were called in to disperse a group of some 90 people.

In Amsterdam, police have so far reported just five arrests after police were pelted with fireworks in Nieuw West. Riot police were also drafted in to restore order in the east of the city after a group of youngsters set off ‘heavy fireworks’. There were no arrests.

In Leeuwarden police made a number of arrests after they were pelted with fireworks in early hours of the morning. One troublemaker ended up in a canal, local broadcaster Omrop Fryslân said.

There were, however, plenty of car fires – at least 17 in Utrecht alone. Cars were also set on fire in Rijswijk, Zeist, Den Bosch, Veen, Vlijmen, Almelo, Amsterdam, Wateringen, Rotterdam, The Hague, Kolummerzwaag and on the former island of Urk, where there had been trouble in the run up to New Year.

This year,  the national Countdown to 2021 on national tv took the form of a laser show instead of fireworks.

This article will be updated as more information becomes available.