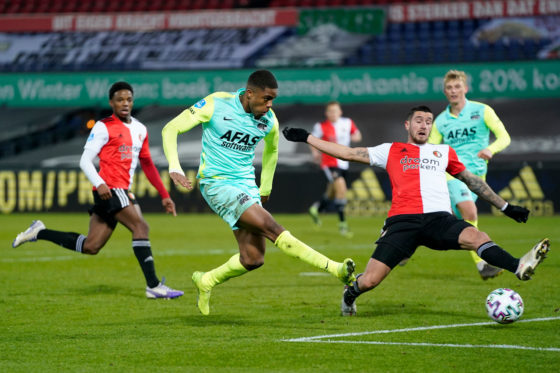 In an open game, Feyenoord twice equalised through Nicolai Jørgensen and Mark Diemers, but had no reply to Boadu’s close-range strike on 70 minutes, from a precise low cross by Calvin Stengs.

Advocaat admitted AZ were the better team. ‘They created chances from the mistakes we made and they have a lot of quality,’ he said. ‘We’re still in the hunt for European football. That’s the most important thing.’

The result meant AZ moved into fourth place ahead of Feyenoord, seven points behind leaders Ajax. The Amsterdammers narrowly overcame in-form Fortuna Sittard in Limburg, with new signing Sebastian Haller scoring the winning goal after 64 minutes as he stretched to steer in Nicolas Tagliafico’s cross.

Vitesse won their fourth game in a row to stay in second place after 18 games. Riecheldy Bazoer’s cannonball off the underside of the crossbar was enough to claim all three points against Groningen.

PSV also kept up the pace with a 2-0 win over RKC Waalwijk. A free-kick by Eran Zahavi at the start of the second half and Pablo Rosario’s close-range finish secured the points, but Roger Schmidt’s side suffered a blow as Noni Madueke was taken off with a hamstring injury.

Utrecht moved into the top half of the table thanks to a late strike by substitute Othman Boussaid. The Belgian midfielder’s sizzling left-foot shot into the top corner lit up an otherwise forgettable match against Sparta.

VVV Venlo maintained their unbeaten start to 2021 with a 1-0 win in Enschede to move further away from the bottom of the table. Substitute Torino Hunte curled in a shot from the edge of the area after 78 minutes for the only goal of the game.

Heerenveen’s slide down the table continued as they went down 1-0 in Almelo, Delano Burgzorg profiting from some slack defending to score the winner two minutes from the end. The Frisian side last won in the Eredivisie on November 1.

PEC Zwolle came back from 1-0 down to win in Tilburg thanks to a second-half hat-trick by substitute Reza Ghoochannejhad. The relegation clash between ADO and Emmen ended goalless to leave the Drenthe side four points adrift at the bottom and still seeking their first league win.