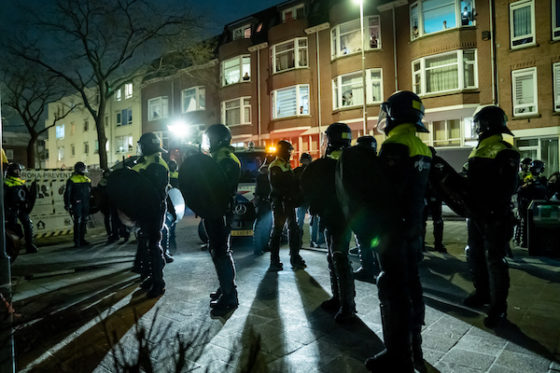 There was a heavy police presence in Rotterdam. Photo: ANP Media TV

In total, 131 people were arrested, 81 of them in Rotterdam, on Tuesday evening, which remained mostly quiet despite fears that there could be more trouble in the wake of Monday’s riots.

Most of the arrests were made for failing to provide ID or for illegal assembly, police said. There was a heavy police presence on the streets, but no major problems, a spokesman told broadcaster NOS.

In Amsterdam, there were a few skirmishes in Osdorp, in the west of the city and in Hilversum a large group of youngsters went home when requested to leave the city centre, NOS reported.

Claims early in the evening that groups of football supporters in Maastricht, Den Bosch and Breda had been given police blessing to patrol the streets ‘to keep them safe’ later turned out to be exaggerated.

In Breda, a group of NAC supporters were asked to go home by police at around 8pm, and mostly did so, a reporter from local broadcaster Omroep Brabant said.

In Den Bosch, police were forced to deny claims that they had been handing out high visibility jackets to fans of the local club, who also wanted to lend a hand.

The offer to patrol was ‘was a kind thought and a valued one, but no more than that,’ a police spokesman told local broadcaster Omroep Brabant. In Zwolle and Doetinchem farmers also offered to help, suggesting they use their tractors to seal off streets to keep rioters out.

The claims that football supporters were being given the green light to operate ‘citizens’ patrols’ were also denied by ministers later. Justice minister Ferd Grapperhaus told television chat show Op1 that ‘maintaining law and order is primary a job for the police’, a position reiterated by police chief Willem Woelders.

Meanwhile, some of the people arrested during Sunday’s riots in Amsterdam will appear in court for a fast track hearing on Wednesday.  First up is 46-year-old Bryan H, who is accused of throwing stones and fireworks at police, as well as carrying a large quantity of drugs.

More cases will be heard at Breda and Middelburg district courts.

Police have also issued photos of several people they want to interview in connection with the Amsterdam and Eindhoven riots.