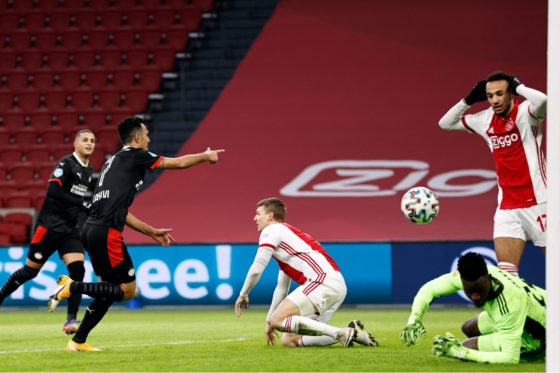 Ajax and PSV Eindhoven shared the spoils in a pulsating top-of-the-table clash in Amsterdam that saw the home side come back from 2-0 down.

PSV took a second-minute lead when Eran Zahavi tucked away a backheeled pass by Donyell Malen, and the same combination were on hand to double the lead midway through the first half.

Quincy Promes restored Ajax’s hopes just before half-time following good work from Dusan Tadic on the left flank, but PSV could have gone into the break 3-1 ahead if Mohamed Ihattaren’s low cross had found Zahavi.

Ajax looked to have levelled the scores early in the second half when new signing Sébastien Haller found the net just five minutes after coming on as a substitute, but VAR replays showed the Ivorian was marginally offside. The equaliser came a quarter of an hour later as Haller held off two defenders in the penalty area before setting up Antony to score.

The result means Ajax stay a point ahead of their opponents at the top of the Eredivisie, while Feyenoord and Vitesse Arnhem both won to close to within three points of the leaders.

‘It was a poor start, we were too passive and it wasn’t easy especially for a few of the younger players to get into the game, but they managed it,’ said Ajax coach Erik ten Hag, who singled out Tadic, Promes and Nicolás Tagliafico for praise.

Feyenoord won the Rotterdam derby against Sparta 2-0 thanks to an early goal by Lutsharel Geertruida and a second in injury time from Nicolai Jørgensen, while Matus Bero made the difference for Vitesse with both goals in an away win in Almelo.

AZ Alkmaar lost ground on the top four as they could only manage a point at PEC Zwolle, while Groningen were denied a win in Utrecht by Gyrano Kerk’s injury-time equaliser.

At the bottom of the table ADO Den Haag grabbed three vital points with a 1-0 win at RKC Waalwijk, Boy Kemper scoring the only goal with a swerving shot that deceived goalkeeper Kostas Lamprou.

VVV Venlo also boosted their survival chances as they came from behind to claim their first win in seven games against Willem II. Georgios Giakoumakis scored both goals, the first a penalty and the second a shot from the edge of the area, to plunge the Tilburgers into the relegation zone.

Fortuna Sittard’s revival continued as they won 3-1 at out-of-form Heerenveen, who have not won in their last eight league matches.

The results leave Emmen four points adrift at the bottom of the table and still seeking their first win after they went down 4-1 at home to FC Twente.