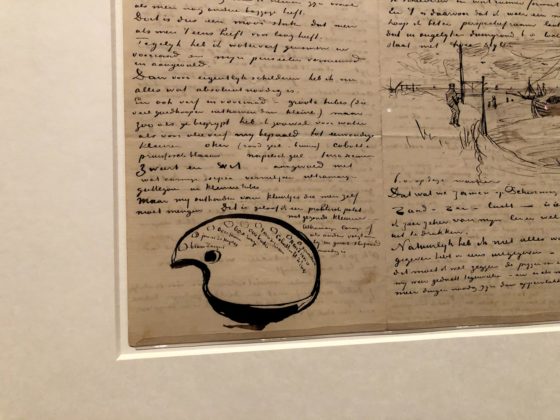 Van Gogh tells his brother about his use of colour. Photo: S Boztas

Researchers at Groningen’s teaching hospital have used modern diagnostic techniques to investigate Vincent van Gogh’s psychiatric problems and disorders, and say he may have twice suffered from delirium due to alcohol withdrawal.

Van Gogh died on 29 July 1890 as a result of a suicide attempt two days earlier. Since then, many different medical and psychological theories have been put forward about the the illnesses from which he suffered.

‘In our research, we used a “bottom-up” approach: we investigated all possible mental symptoms using structured diagnostic interviews as well as all possible epileptological symptoms,’ said UMCG lead researcher and professor, Willem Nolen.

The researchers also interviewed three art historians who know Van Gogh well from his correspondence (902 letters, including 820 to his brother Theo) and from information from the doctors who treated him.

Van Gogh suffered from a combination of several psychiatric disorders. From early adulthood, he mentioned in his letters various symptoms consistent with both a mood and a personality disorder and in later life these may have been exacerbated by  alcohol addiction and malnutrition.

Following the conflict with his friend and colleague Paul Gauguin, Van Gogh cut off his ear on 23 December 1888. The new theory put forward by the UMCG researchers is that Van Gogh subsequently experienced two brief psychotic episodes, presumably delirium due to alcohol withdrawal, because he was forced to suddenly stop drinking alcohol following his admission to hospital.

His condition then deteriorated further and in the last year of his life he experienced several severe depressive episodes, at least one of which had psychotic features. ​He was unable to make a lasting recovery, which probably led to his suicide in July 1890.

There were no obvious signs that he suffered from schizophrenia, as some have suggested and the researchers ruled out porphyria (a rare metabolic disease) and gas poisoning (due to carbon monoxide from lamps). Whether Van Gogh suffered from epilepsy is still open for discussion.

‘We think we can safely rule out some previously suggested diagnoses and we are more or less certain about several illnesses that he suffered from, but we will never really know for sure,’ says Nolen. ‘We were not able to interview the patient personally, which means that we must exercise caution in our conclusions.

‘And although Van Gogh’s letters contain a lot of information, we must remember that he didn’t write them to his doctors, but to his brother Theo and other family members and other relatives in order to inform them, to reassure them or to get something done. He might have downplayed or even embellished certain things. Therefore, our article certainly won’t be the last on Van Gogh’s illnesses.’

The research was published on Monday in the International Journal of Bipolar Disorders.