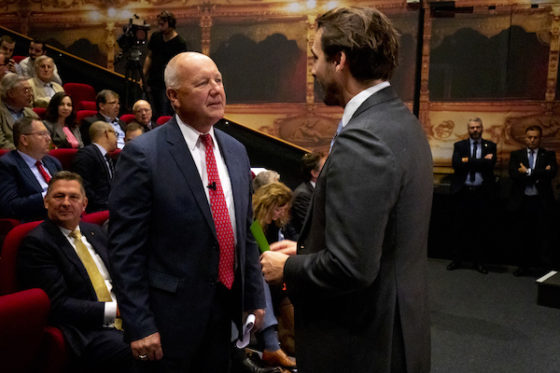 MPs from across the political spectrum have called for an explanation of why the US embassy in Wassenaar hosted an event for the far right Forum voor Democratie earlier this month.

One guest, Yves Gijrath of the Masters of Luxury trade fair, described the gathering in a podcast as a ‘meeting, fundraiser or something’ and an email about the event, according to the Groene Amsterdammer, was signed by Joyce Vastenhouw, who described herself as ‘head of fund raising’.

Nevertheless, a spokesman for the embassy told DutchNews.nl earlier that the event was not a fundraiser, but a ‘town hall’ meeting with a question and answer session hosted by ambassador Pete Hoekstra.

The embassy regularly holds events with political parties as part of its wish to establish dialogue with people and parties with a range of views, the spokesman said.

According to Gijrath in the Groene Amsterdammer, the audience was a mixture of party stalwarts and business people. MP Wybren van Haga, who joined FvD after being expelled from the VVD, described the event as a ‘network meeting’ of the party’s ‘inner circle’.

Guests were also shown a new Forum campaign video about the Netherlands in 2040, including mocked up pictures of party leader Thierry Baudet with Donald Trump, whom he is known to admire.

VVD, D66, GroenLinks and SP MPs have now called for an explanation, with GroenLinks MP Bram van Ojik describing the gathering as ‘interference in our elections’. The Netherlands goes to the polls next March.

In May eyebrows were raised when Hoekstra appeared on the Forum voor Democratie’s own video channel in an interview with founder Thierry Baudet. Last year he was also a guest speaker at the party’s conference.

Update: Baudet told NOS Radio on Tuesday morning that the claims the event was a fundraiser are ‘nonsense’ and a ‘conspiracy theory’.

‘It was not about donations or anything else. I really don’t understand the fuss,’ Baudet said.