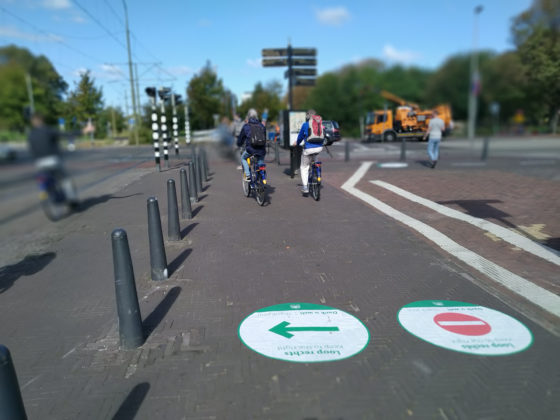 A one way system to ensure social distancing in The Hague. Photo: DutchNews.nl

A hotline to organise coronavirus tests for healthcare staff and teachers has been inundated with calls since it went live on Monday morning.

The health ministry announced on Friday that frontline staff would be given priority as the government tries to manage the strain on the testing system. Conversely, children under 13 with mild symptoms such as a sore throat or runny nose no longer need to be tested or kept off school because they are deemed to be low-risk.

Schools have had to merge classes or send children home as a result of teachers having to wait for up to a week to receive their test results, while hospitals and nursing homes have also had to cope with staff shortages.

Around 1400 calls were taken in the first 25 minutes after the line was launched. Some people were asked to call back again 30 minutes later, NOS reported. ‘We suspect it is going to be busier than usual this morning,’ a spokesman for the branch organisation GGD GHOR Nederland said.

The number of tests being carried out is close to its daily capacity of 35,000, with health board inspectors warning that 55,000 tests a day will be needed by November if the current trend continues. The positive test rate has risen from less than 1% to 3.9% in the last month.

‘My student daughter finally got through to the Amsterdam health board to book a test and was told that she should go to Den Helder, where they had space,’ one woman told DutchNews.nl. ‘We ended up paying €150 for a private test.’

New restrictions came into force on Sunday evening forcing bars across the country to close at 1am, with music switched off and no new customers admitted after midnight. Mass gatherings are being restricted to 50 people, though some events such as funerals are exempt.

The government has also introduced a regional alert system so that areas with high infection rates can take extra measures where necessary. Six health board regions, including those covering the four largest cities Amsterdam, Rotterdam, The Hague and Utrecht, have been classed as category 2 (‘concerning’) on a scale of 1 to 3. 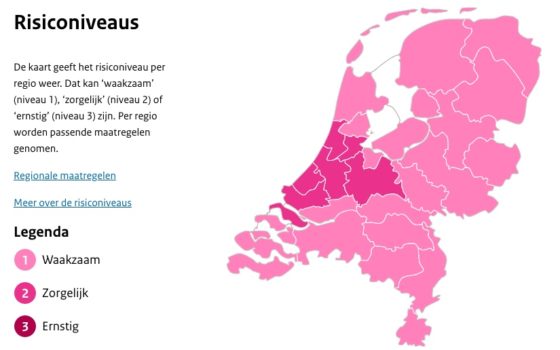 Rotterdam, The Hague and the Hollands-Midden region, which includes Leiden, are introducing special opening times for vulnerable groups such as the elderly at libraries, swimming pools and other public facilities to protect them.

The Kennemerland board, which covers Zandvoort, has banned loudspeakers and musical instruments from its beaches until October 1. 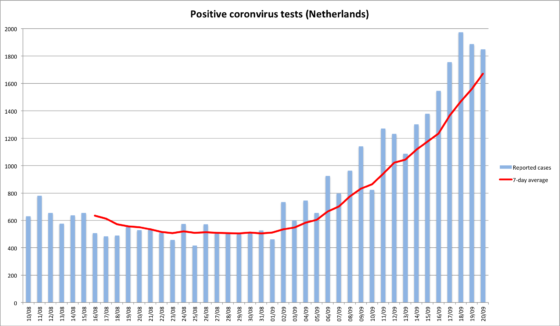 Cases have risen steeply since the start of September. Source: RIVM

With people aged 20 to 40 accounting for around 40% of all infections and the virus spreading rapidly in student towns and cities, local governments are targeting information campaigns at the young and stepping up surveillance of illegal parties.

On Sunday night police who arrived to break up an illegal house party in Rotterdam were pelted with cans and litter. The city’s mayor, Ahmed Aboutaleb, said he was ‘deeply distressed’ to learn of the incident.

Infection rates have surged by 50% in each of the last two weekly reports issued by the public health agency RIVM and the next report is expected to show a similar rise. On Friday the daily number of positive tests hit a new peak of 1,974.

Hospital admissions remain relatively low but have started to rise, with the three-day average reaching 21.7 on Sunday – the highest figure since May 20. 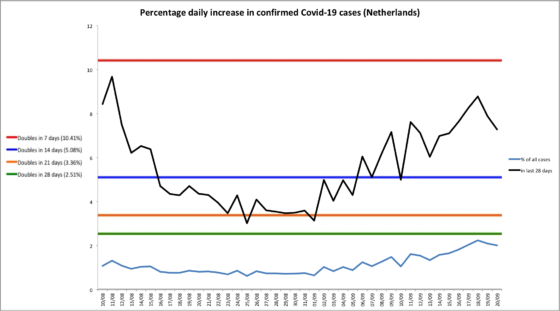