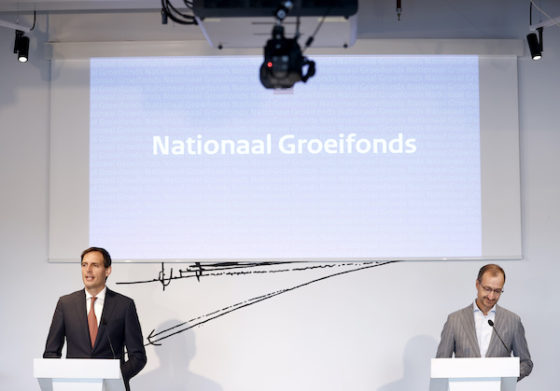 The cabinet has set up a €20bn investment fund which will put money into boosting economic growth and maintaining prosperity over the coming five years.

The National Growth fund will focus on projects which develop skills and expertise, the infrastructure, and innovation, ministers say. The aim is to keep the economy on an even keel ‘so we can keep paying for healthcare, education and pensions, and have money left over for other household spending,’ the cabinet said in a statement.

The fund, which was first mooted last September before coronavirus hit, will enable the government to make investments rather than cuts because coronavirus has ‘made it even more clear that prosperity and economic growth cannot be taken for granted,’ ministers said.

Projects applying for funding will be checked by an independent commission which includes former finance minister Jeroen Dijsselbloem, startup tzar prince Constantijn, and scientist Robbert Dijkgraaf. Projects must involve a minimum investment of €30m and there is no upper limit.

Ministers will not have a role in selecting which projects should be funded to avoid ‘political games,’ economic affairs minister Erik Wiebes said at the launch in Amsterdam. ‘The funding will pay for itself in terms of greater prosperity,’ Wiebes said. ‘We must be better off as a society through the investments we are making.’

In January, the government launched a new €1.7bn investment fund which aims to  make it easier for Dutch companies to attract European investors. Invest-NL will be used as risk capital in the form of loans or shareholdings rather than subsidies to start-ups, scale-ups, innovative projects and exporters.

France and Germany already have similar funds. Invest-NL will focus on the Netherlands only, with an emphasis on innovation and sustainability – particularly the transition to a gas-free economy. The threshold for investment will be €5m, of which Invest-NL will contribute a maximum of 50%.