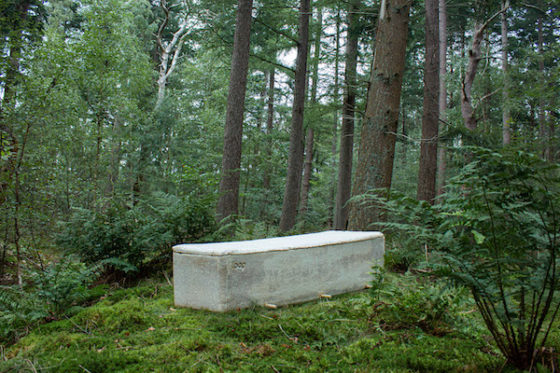 Dutch designers are claiming a world first with a funeral in which the deceased person was buried in a moss-filled coffin made of mycelium: the underground fungal network of mushrooms.

The Living Cocoon was developed by Bob Hendrikx, together with researchers from Delft University of Technology and the Naturalis natural history museum, and has already been incorporated into the coffin collections offered by two Dutch funeral companies.

‘The Living Cocoon enables people to become one with nature again and to enrich the soil, instead of polluting it,’ says Hendrikx. ‘‘After months of development, it was a really impressive moment to be finally able to mark someone’s passing in this extraordinary way.’

The speed at which a body composts depends on various conditions but it can take over a decade. The varnished and metal parts of a coffin, as well as synthetic clothing, can persist for even longer.

Hendrikx expects that the mycelium coffin will be able to complete this entire process in two to three years, because it actively contributes to the composting process. Not only are the waste products from the human body converted into nutrients but the quality of the surrounding soil is also improved, giving it new life and an opportunity to thrive.

The production process takes several weeks and the mycelium is grown in the shape of a coffin and then dried naturally, pausing its growth. Once it has been exposed to ground water for some time, the mycelium starts to live again, starting the composting process.

The coffins themselves are lightweight but can carry up to 200 kilos in weight. The first 10 have now been ‘grown’, and the company hopes to be able to expand abroad in the near future.

While the Dutch coffin may be a first, in 2015, Californian designer Jae Rhim Lee developed a suit embedded with mushroom spores to speed up decomposition and neutralise toxins the human body releases.

Actor Luke Perry was reportedly buried in a ‘mushroom death suit’ when he died after a heart attack last year.