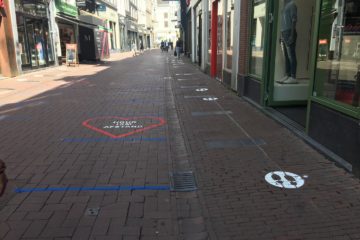 Cars are out, bikes are in and yes, even on narrow cobblestone paths you need to keep your distance. As the new anderhalvemetersamenleving settles in, cities and towns are finding some creative solutions to create enough social distance for those using the streets. But not all of the measures are going over well.

In May, the city of Amsterdam announced it was taking a number of temporary measures to allow for more space so that people could maintain social distance in the city. Utrecht followed Amsterdam’s lead, announcing it would confiscate parking spaces for bike parking. The Hague extended traffic lights to give pedestrians and cyclists more time at junctions.

These crowds are a thing of the past. Photo: Depositphotos.com

Commuting
As more and more city governments announced that they were giving (an even) lower priority to cars, Anna Visser was getting more and more fed up with Amsterdam’s approach to the new spaced out society. ‘I can’t cycle to work,’ says the Amsterdam resident who works as a nurse in a psychiatric clinic near The Hague. She used to take public transport but now thinks it’s too risky.

Although essential workers have been exempted from restrictions in most cities, Visser says the extended times for pedestrians at crossroads, the reduced speed and the narrowing of roads have added 20 minutes to her commute.

Parking
Another Amsterdam resident, who gave her name as Monica Hendricks, was frustrated with the lack of her parking on the street after the city turned several parking spaces into bike parking. ‘There was already a lack of parking. I pay for the right to park but there’s no space to do so.’

That sentiment was also expressed in Utrecht, where residents in one neighbourhood saw 10 parking spaces on one street given over to cafes to extend their terraces. ‘It will not be possible to meet all wishes and ideas. The physical space for this is simply lacking, certainly in the old center,’ the municipality said in a statement. 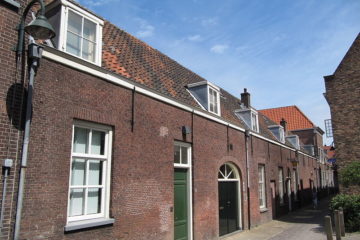 The now pedestrian-only Schoolstraat in Delft Photo: Michiel1972 via Wikipedia

Cyclists
‘I find it very irritating,’ Marc de Vries who was cycling his usual route to work through the city center of Delft when he discovered his normal route had been turned into a pedestrian-only street. The change was only marked by a small sign and there was no public announcement about the switch.

The street used to be for pedestrians only, but as anyone who lives in the Netherlands knows, it’s hard to contain the cyclists and almost 15 years ago it was opened up to bikes. Instead, the city occasionally stations city stewards to tell cyclists to dismount, resulting in even more people on the narrow street.

Now De Vries has to divert via another narrow city centre street. ‘I wondered what happened. We suddenly saw so much more bike traffic,’ said a resident. De Vries’ new route is only 37 centimetres wider than the Schoolstraat.

Around the world, cities have been reshaped by corona. Paris added 650 kilometres of new bike lanes. The British government has widened pedestrian walkways and created more bus lanes. Milan is offering rebates to citizens who buy bikes during corona. Cafes in Brussels confiscated parking spaces in front of their buildings and turned them into outdoor seating.

Communication
The lack of clear communication was cited as a major irritant. ‘I didn’t even know this was going to happen.There was no notice, nothing,’ Hendricks said of the removed parking spaces.

Some people are happy with the changes. ‘We of course, want fewer cars to be in cities,’ said a member of GroenLinks, speaking on the condition of anonymity. ‘But it doesn’t help if cities aren’t clear about why the changes are being made and how they are beneficial.’

While the extra terrace space may be nice during the summer months, its not clear to many if the changes will still be around in the winter. Many of the changes are said to be temporary, but the city installed bike racks in some of the spaces on Hendricks’s street. ‘They don’t look temporary,’ she says.

Even in the summer, the parking space terrace seat is a bit odd. After a few drinks one evening, one terrace guest accidentally smacked the windshield of a passing car while gesticulating. ‘You’re only maybe ten centimetres from the traffic,’ she said.