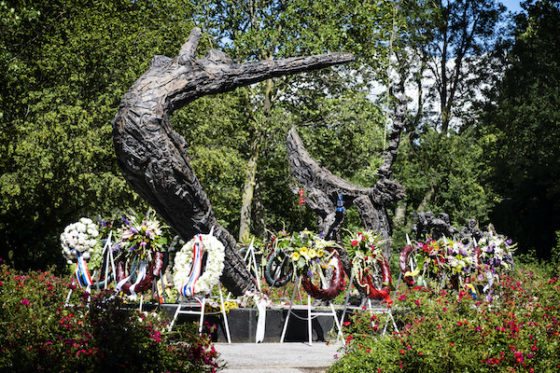 Ceremonies and meetings took part at different locations across the Netherlands on Wednesday to commemorate the end of slavery in the Dutch colonies.

The gatherings took place against a backdrop of anti-racism demonstrations across the Netherlands and mounting calls for formal apologies for the Netherlands’ past as a slave trading nation.

Education minister Ingrid van Engelshoven said in a speech in Amsterdam that the government has not yet been able to prevent inequality and exclusion. ‘And as long as one Dutch person discriminates against another on the basis of the colour of their skin, then we are still witnesses to this terrible past,’ she said.

Meanwhile, two of the four ruling parties – D66 and ChristenUnie – have both now said that the Dutch government should apologise for the role the Netherlands played in the slave trade.

The apology should be made as part of a wider discussion in society about ‘this black page in our history,’ ChristenUnie leader Gert Jan Segers said. ‘We must reconcile as an entire society with a past that involved in human suffering, which continues to this day.’

MPs are debating racism, discrimination and slavery with ministers on Thursday afternoon.

The government on Wednesday announced it had set up a special committee charged with stimulating dialogue about the country’s role in slavery and the slave trade.

Rapper Typhoon, former Curacao governor Frits Goedgedrag, and former international football player Edgar Davids are among the members of the advisory group. Home affairs minister Kajsa Ollongren said the committee’s focus would be one of ‘reconciliation and a wider recognition of our shared pasts.’

The committee, supported by a group of academics, will make its recommendations to the government prior to May 2021.

Slavery was finally abolished in the former colonies of Suriname and the Dutch Antilles on July 1,1863, ending a period of around 200 years of slavery.

However, slaves in Surinam were only fully freed in 1873, since the law stipulated that there was to be a mandatory 10-year transition period. Owners were also paid compensation of 300 guilders for every enslaved person they released.

Known as Keti Koti (broken chains), the commemorations to celebrate the end of slavery have just been included in a revised list of 50 events which helped shape the Netherlands as it is today.

‘This is the acceptance and the confirmation that our slavery past is a shared past,’ Linda Nooitmeer, chairman of the national institute of slavery studies Ninsee, said in her speech at the main Keti Koti ceremony in Amsterdam.

Meanwhile, a group of anti-racism activists on Wednesday called for ‘Afrophobia’ to be recognised and for specific policy to be developed in an effort to tackle it.

Afrophobia focuses specifically on racism against people of African origin, campaigner and academic Barryl Biekman told broadcaster NOS.  ‘It is about more than the fear of people with black skin,’ she said. ‘It is about institutionalised delusions about Africa and African people.’