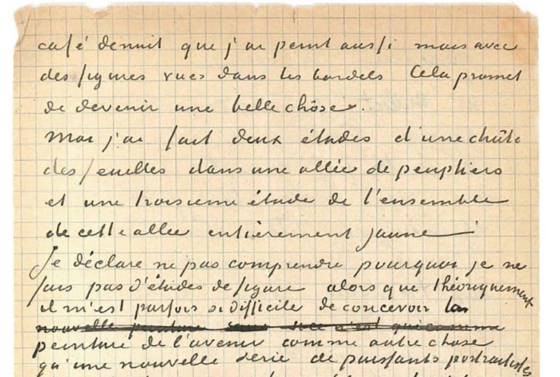 A letter in which Vincent van Gogh and fellow painter and friend Paul Gauguin discuss a visit to a brothel is expected to fetch between €180,000 and €250,000 at auction on Tuesday.

The four page letter, which will be going under the hammer at Parisian auction house Drouot, was written to fellow artist Émile Barnard in 1888. The two painters were in Arles where Van Gogh painted such famous works as The Yellow House, Terrace at Night and The Bedroom.

Van Gogh (1853-1890) and Gauguin (1848-1903) tell their friend in the letter, written in French, that ‘we have been on an excursion to some brothels a few times and we plan to go back and work there. Gauguin is working on a canvas of the same night café I painted. But he’s putting in people we’ve seen at the brothel. It’s going to be wonderful.’ Van Gogh writes.

Elsewhere in the letter he describes his friend as a man for whom ‘sex and blood are more important than ambition’. He also wrote about the artists’ colony he was planning to set up in Arles at the yellow House and which he had invited Gauguin to join. ‘Don’t listen to Vincent’, is Gauguin’s contribution to the letter. Gauguin would be the first and only visitor to the artists’ colony.

Van Gogh often went to brothels and when he cut off part of his ear he delivered it to another brothel he had visited with Gauguin. The story is that he did so after he had had a fight with the painter which put an end to their always turbulent friendship.

Van Gogh often painted brothel scenes and portraits of prostitutes and in The Hague Van Gogh lived with prostitute Sien Hoornik for a year, who modelled for him.