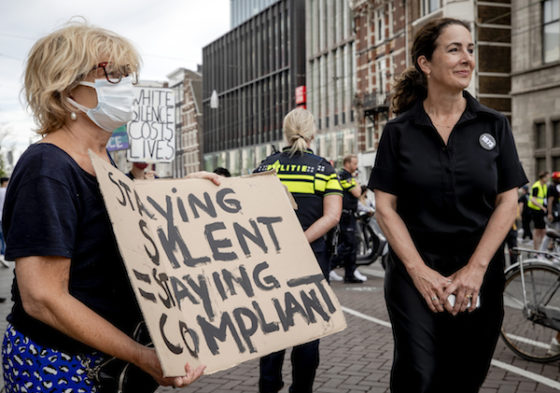 Amsterdam mayor Femke Halsema has come in for fierce criticism for not intervening to stop an estimated 5,000 people coming to the Dam in the centre of the city for a demonstration against police violence.

The mayor told a television current affairs show on Monday evening she had been taken by surprise by the numbers who turned up.

‘The organisers had said they expected 250 to 300 people, and usually figures like that are an exaggeration,’ Halsema told Op1. ‘But during the demonstration the number swelled and the police were not prepared.’

The organisers had called on everyone to wear a mask and to keep to 1.5 metres distance, but that was not always possible because of the size of the crowd. ‘It was very busy,’ one demonstrator told DutchNews.nl.

However, justice minister Ferd Grapperhaus has described the demonstration as painful ‘at a time when we are doing all we can as a society to get coronavirus under control.’

Klaas Dijkhoff, parliamentary leader of the VVD, said everyone at the demonstration should go into quarantine for two weeks, a call echoed by the mayor of Haarlemmermeer.

Other critics pointed out that parks have been closed when they get too busy and cafe owners face restrictions on numbers because of the 1.5 metre rule.

However, health experts say that the demonstration is unlikely to become a ‘superspreading’ event.

While there are risks in being in a large crowd and not keeping 1.5 metres distance, most demonstrators were wearing masks and any infected droplets would be blown away by the wind, Leiden virologist Mariet Feltkamp told broadcaster NOS.

Nevertheless, the Parool points out that less than a month ago, Halsema was one of a handful of people on an empty Dam for the Remembrance Day commemorations.

‘What impact will this have on the rest of the Netherlands’ motivation to stick to the coronavirus rules at work or on a cafe terrace?’ the paper said. ‘Of course it is the individual’s responsibility, but are we not dealing with this together? Halsema has some explaining to do.’

But Jerry Afriyie, one of the organisers of the demonstration, said he was proud of ‘his mayor’.

‘I am glad she has shared the pain of part of the Amsterdam family and given the room for this pain to be expressed,’ he said on Twitter. ‘Today was historical, and only people who approve of racism can complain about her courage.’