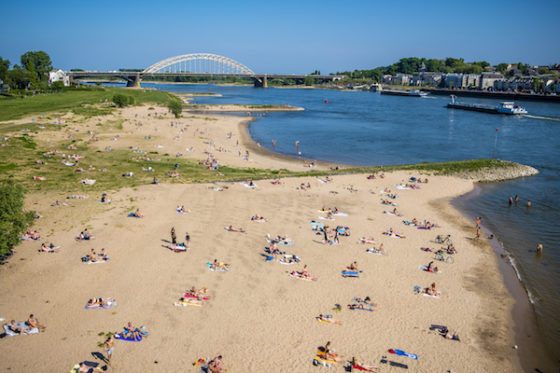 Relaxing on the banks of the Waal river at Nijmegen. Photo: Marcel Krijgsman / Hollandse Hoogte

The Netherlands enters a new phase in the campaign to control coronavirus on Monday, when primary schools reopen and people in ‘contact professions’ such as hairdressing are allowed to open their salons again.

In addition, the Dutch approach has switched from ‘stay home’ to ‘stay home if you have symptoms’ and from Monday, the over-18s can resume outdoor sports which do not involve physical contact, such as tennis and golf.

The impact of the changes will be carefully monitored to make sure they do not boost the Dutch infection rate, which is currently below 1. A rise above 1 would mean the virus is starting to spread more quickly again.

Subsequent easing, planned for June 1, will depend on this and other key conditions, health officials say.

Prime minister Mark Rutte on Friday stressed that individuals have the responsibility to make sure that they stick to the 1.5 metre rule. Asked if there will be strict enforcement when cafes and bars open, Rutte told reporters the Netherlands ‘is not a police state’.

‘We don’t want cafe owners to police their terraces,’ he said. ‘This is something we all have to do together.’

Rutte also said he recognised that the partial lifting of the Dutch lockdown had given rise to many questions. ‘We have to live with uncertainty and act sensibly,’ he said. ‘You can’t solve every problem in a couple of weeks.’

Meanwhile the Saturday sunshine led to overcrowding in some places and Dutch railway company NS urged people not to head for the seaside resort of Zandvoort.

In Amsterdam, the Vondelpark’s side entrances were shut so officials could better monitor the number of people. Elsewhere in the capital police cleared several areas where hundreds of people had gathered to enjoy the sun and to swim.

Utrecht and Leeuwarden mayors urged people to avoid their inner cities and in Leiden the main Haarlemmeerstraat was closed for a time because there were so many people walking along it, the AD reported.

Breda has developed an app alert to warn people if the city centre is too busy and in Rotterdam officials have put together a one way system to guide shoppers round markets which have reopened after several weeks of closure.

Natural heritage organisation Natuurmonumenten and forestry commission Staatsbosbeheer both said that parks and nature reserves were busy in places but that in general people were sticking to the 1.5 metre rule.

Hubert Bruls, chairman of the regional public safety agency, told broadcaster RTL that more people are already going out. ‘It appears to be getting a little busier every weekend,’ he said. In most cases, when people are too close together ‘just talking to them or giving a warning’ is sufficient.

‘People and companies are primarily responsible and have to make sure the virus remains under control, so that a further relaxation of the rules becomes possible,’ he said.