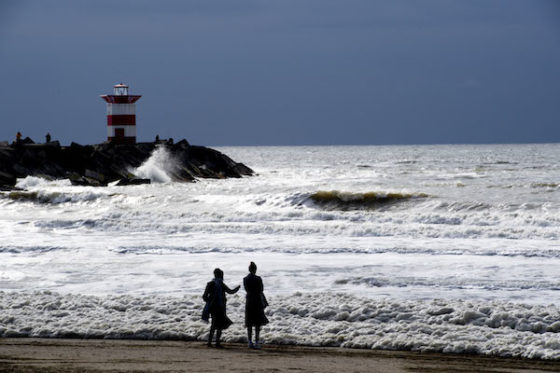 Friends and family of the dead surfers have been placing flowers on the beach. Photo: Robin Utrecht HH

Dutch sea research institute NIOZ is investigating the possible role of a thick layer of sea foam in the death of five surfers off the coast of Scheveningen on Monday evening.

Several experts have suggested the surfers may have become disorientated in the foam, which according to some eyewitnesses was over two metres high as it approached the harbour wall.

Sea foam is formed when sea water has a high concentration of dissolved organic matter from algal blooms and is whipped up by the wind.

‘There was a lot of foam and this may be due to the large quantity of algae,’ researcher Katja Philippart told broadcaster NOS. ‘This might be due to the good weather of recent days, combined with the strong winds.’

However, Philippart told NOS she is not aware of any cases in which people have been suffocated by sea foam.

One body has not yet been recovered and the search resumed on Wednesday morning. Two other bodies were found earlier on Tuesday morning and two others died after being pulled from the sea on Monday evening. Three of the men who died came from The Hague, the other two from Delft.

The Hague mayor Johan Remkes told reporters at a press conference that a thorough investigation into what happened would now take place. ‘How can it be that people with so much experience and who knew this place so well came to die,’ Remkes said.

In total, 10 people are thought to have been in the water at the time, a group of six, a group of three and one single surfer.

Friends and family of the dead have been flocking to the location where the five men died, to leave flowers and comfort one another. The deaths have caused shock throughout the Netherlands’ surfing scene.

‘These were very experienced surfers and swimmers, with a great love for the sea and their sport,’ the Holland Surfing Association said. ‘They were caught up in extraordinary circumstances and lost their lives in such a tragic way.’