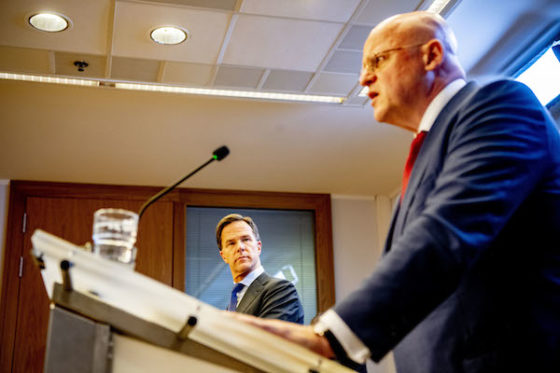 The Netherlands has brought in a ban on all organised gatherings until June 1 and will give mayors the power to fine people who break the rules – including those who do not keep 1.5 metres from others.

The tough new measures were announced by justice minister Ferd Grapperhaus at a news conference on Monday evening, following a meeting of the government’s crisis committee with health and security experts.

‘The key to our success is our own behaviour,’ Grapperhaus said. ‘Do not go out unless you have to leave to go to work, or do do shopping. Go shopping alone. And if you do want to go for a walk, don’t go in a group.’

Grapperhaus said he realised the ban on gatherings to June 1 – which means all the festivals being organised for Liberation Day – will be hard for a lot of people.

‘But we have no other choice to combat coronavirus,’ Grapperhaus said. By giving the date now, organisers can adapt their planning, the minister said.

Mayors are also to be given emergency powers to ban groups of three or more people from being together if they are not keeping the 1.5 metres distance and to close parts of their towns and cities where people are flouting the law.

A decision on whether or not keeping schools, cafes and restaurants should remain closed will be taken on or around April 6 as planned, ministers said. The closure has also now been applied to hairdressers and nail studios.

Grapperhaus also said in answer to questions later that informal school groups would also be subjected to fines.

Shops will have to make sure the measures they are introducing to keep customers apart are displayed at the entrance. Shops which do not keep the rules will be subject to fines of up to €4,000.

Mayors will also be able to close food markets if they do not have the facilities to ensure people stand at least 1.5 metres apart.

‘If you are not bothered about the impact of your behaviour on other people then you can face a fine,’ a visibly irritated prime minister Mark Rutte said.

In effect, the Netherlands is going into an ‘intelligent lockdown’, Rutte said. ‘If someone in your family is ill, everyone should stay home. In other situations, if you want to get a bit of fresh air, you can, but go alone.’

The prime minister also had harsh words for youngsters who might feel that they cannot get sick. ‘I was very irritated by the young people I saw on television saying they were not worried,’ the prime minister said.

‘If you do get sick, you can infect others. We live with 17 million people together,’ the prime minister said.

Newly appointed health minister Martin van Rijn said that at the moment, there is enough capacity in intensive care wards at Dutch hospitals to cope.

The Netherlands is also working on setting up its own capacity to produce breathing apparatus, he said.